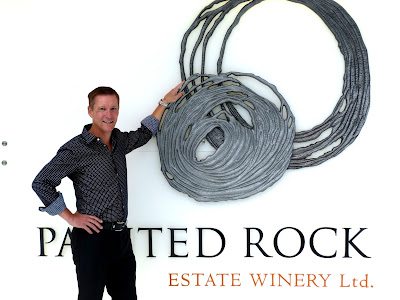 Now there is a new and stunning red wine from Painted Rock Estate Winery: the winery released its first Cabernet Franc from the 2013 vintage.

If there was ever a sign that Cabernet Franc is emerging in the Okanagan from the shadow of Merlot and Cabernet Sauvignon, this is it.

Fine wines are made from the latter two varieties, with the Painted Rock Cabernet Sauvignon and Merlot good examples.

Cabernet Franc, for the most part, has vanished into Meritage blends; and the blends are always the better for it.

But as a standalone wine - when I searched the list for one VQA store, I found just five Cabernet Francs. I found another three Canadian Cabernet Francs in the B.C. Liquor Stores catalogue and not many more at Everything Wine.

I know there are more excellent Cabernet Francs out there than that. If the new Painted Rock wine is an example, we need to have even more.

The only flaw in that rationale is that, in the blistering Okanagan summer, Cabernet Franc shuts down earlier that Cabernet Sauvignon. The vines are protecting themselves and saving water. By doing that, the vines stretch out the ripening process -- until Franc is just as late as Sauvignon.

Presumably, there is a viticultural solution. Certainly, it seems like Painted Rock’s John Skinner has it figured out.

But he also has a lot else figured out. These reds from the 2013 vintage all are excellent. They are bold and ripe, usually with alcohols approaching 15% - but with no heat on the palate. The Red Icon 2013 may be one of the best yet.

Painted Rock Red Icon 2013 ($47.49). This is a blend of 33% Merlot, 29% Cabernet Franc, 21% Petit Verdot, 12% Malbec and 5% Cabernet Sauvignon. The wine was aged 18 months in French oak (30% new). It begins with an inviting aroma of vanilla, black cherry and chocolate. On the rich and full palate, there are flavours of black currant, plum, dark chocolate and coffee. On the finish, there are notes of cloves, pepper, vanilla and chocolate. The texture is elegantly polished. 94.

Painted Rock Cabernet Franc 2013 ($44.99). This is a delicious wine. To bring out the best, one should decant it and let it breath for an hour or two. That reveals classic brambly aromas. The flavour palate is a riot of red fruit, including plum, blackberry and cherry with a hint of chocolate and tobacco. The rich finish includes notes of red plum jam. 92.

Painted Rock Cabernet Sauvignon 2013 ($34.69). Dark in colour, the wine begins with aromas of vanilla, black cherry and red fruit. The texture is full and polished, with long ripe tannins. The wine has ripe flavours of black cherry, black currant and plum. The sweet fruit flavours linger on the finish, along with hints of tobacco and cedar. This is an elegant and sophisticated Cabernet Sauvignon. 92.

Painted Rock Merlot 2013 ($34.69). Dark in colour, this brooding Merlot  begins with aromas of plum, cassis and spice, leading to flavours of cassis and blueberry. There is a hint of chocolate and espresso on the finish. This is another wine that benefits from decanting, to allow the concentrated texture to reveal the aromas and flavours. This wine will blossom with five or more years of cellaring. 92

Painted Rock Syrah 2013 ($34.99). The aroma is ripe and inviting, with notes of plum, black cherry and pepper. Svelte and polished in texture, the wine has flavours of red fruit with hints of dark chocolate and black coffee. The pepper on the savoury finish punctuates a delicious wine. 93.

Posted by JohnSchreiner at Goodgrog at 1:03 PM