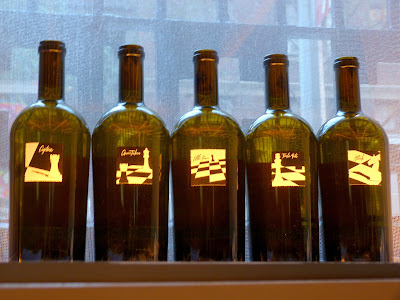 Anthony von Mandl’s genius at positioning his Okanagan wines reached an absolute pinnacle this week when he launched CheckMate Artisanal Winery’s  five Chardonnays in before releasing them in .

Even before that event, the first bottle was presented privately to Prince Edward, the Earl of Wessex. Next week, Anthony will fly to to deliver the bottle personally and to have dinner at .

The point is to ensure the world, including the New York wine trade, takes notice of perhaps the most exceptional (and expensive) Chardonnay wines made, so far, in the Okanagan Valley.

In case and a toney restaurant don’t quite drive the point home, Anthony also has a current hook for these wines: climate change.

“Climate change is altering the wine world faster than anyone imagined,” CheckMate says on one of its information cards. “It has become too hot to make complex Chardonnays in some previously celebrated regions where the grape’s natural acidity is being crippled by heat.”

The card goes on to say that four years had been spent on a “daring initiative … to take advantage of climate change to make new world Chardonnay with old world elegance in .”

Clearly, Anthony wants to be a leader of the parade of vintners adapting to climate change. Just so that no one missed the point, one of the speakers at the CheckMate launch was a distinguished climate scientist. And two fine California Chardonnays were served at lunch as reference wines along with the five CheckMate Chardonnays. The Okanagan wines have fresher acidity.

There probably has not been a Canadian wine that launched first in the (at least not since Prohibition).  The CheckMate launch was a tour de force – as are the wines.

Anthony von Mandl (right) has a history with Okanagan Chardonnay. It began in 1992 when John Simes, then the newly recruited winemaker at Mission Hill, barrel-fermented some exceptional Chardonnay grapes he had secured for the winery.

Two years later, that wine won the trophy as the best Chardonnay at the International Wine & Spirits Competition in . Almost certainly, it was one of the first meaningful trophies won by a Canadian Chardonnay in a major international competition. Mission Hill immediately positioned it as the “world’s best Chardonnay.”

The 2012 vineyard purchases was part of deal that also included Anthony’s purchase of the former Antelope Ridge winery, which also had a block of mature Chardonnay. That 19-year-old winery was gutted and renovated to become the new CheckMate winery, dedicated to Chardonnay. Trial lots of wine were made there in 2012 but were never released. The debut wines are from 2013.

“I happen to love Burgundian Chardonnays,” Anthony told his luncheon guests. “I believed we could produce Chardonnays of similar sophistication.”

Deciding he needed an “intellectual” winemaker, he undertook a world-wide search. He selected Australian Philip Mcgahan (below), a former lawyer who had become a winemaker and was working at the prestigious Williams Selyem Winery in .

Philip is a 2006 bachelor of applied science (wine science) from . He grew up in and worked in the before joining Williams Selyem about 2010.

He did not have to be convinced that making great wine involved adapting to climate change. “I started my career in the , where it is becoming too hot to make wine,” he says.

Given the run of Mission Hill’s Chardonnay blocks, he has narrowed his selection to a total of seven acres of vines in three different locations.

The Heritage Vineyard in the Golden Mile Bench appellation is adjacent to the CheckMate winery. “This vineyard contains what may be the oldest Chardonnay plantings in ,” the winery says. “These vines were planted 40+ years ago [with] an extraordinary, distinctive Chardonnay clone, of unknown origin, that we call Heritage.”

The concept of vineyard blocks gave rise to the winery name.

“If you look at a chessboard and you think each of the individual squares being a block in a vineyard, it allows us to really dial in on specific blocks and make some very limited edition wines,” Anthony explains. “It will allow us to do interesting wines with interesting names. You could have all sorts of things to do with chess and it all dials back to the specific blocks the grapes are coming from, and the techniques we are using. There is a lot of expertise going in there.”

For all of his intellectualism and for all of the modern processing equipment, it is not Philip’s style to indulge in complex manipulation of the wines. The grapes are harvested by hand, at night when they are cool. He does some wild ferments in barrels or puncheons, stirs the lees periodically and then lets the wines age until they can be bottled, unfined and unfiltered.

The resulting wines are among the most sophisticated Chardonnays so far from the Okanagan. They are intense in flavour and terroir characters, with the acidity and structure reminiscent of great . These age-worthy wines clearly raise the bar for Canadian Chardonnay, and for other producers who also can find something positive in climate change.

CheckMate has no tasting room. The wines will all be allocated through the winery’s website at www.checkmatewinery.com.

These are the wines.

CheckMate Capture 2013 ($90). Border Vista Vineyard grapes are in this wine. A struggling wild ferment contributed to aromas that were initially slightly funky but evolved to notes of orange peel. There is more citrus and spice on the palate, with refreshing acidity. The texture is both firm and rich. 92.

CheckMate Queen Taken 2013 ($125). The grapes are from the Heritage Vineyard. This is 50% wild ferment. The aromas appeal with refreshing hints of citrus and brioche. On the palate, there is the note of white peach characteristic of the Heritage clone. The wine has a rich mid-palate texture, with a spice of minerality and with refreshing acidity. 95.

CheckMate Little Pawn 2013 ($110). The grapes for this are from the Barn Vineyard. Again 50% of the fermentation was with natural yeast. The wine has a strikingly floral aroma with subtle hints of citrus and well-integrated oak on the palate. The wine is exceptionally elegant. 94.

CheckMate Attack 2013 ($115). The grapes also came from the Barn Vineyard. What sets this off against the previous wine is that Attack was aged 18 months in a new oak foudre. That is a thick-staved oversized barrel, perhaps 1,000 litres in capacity. Wines age more gracefully in a foudre and take up imperceptible oak. This wine has aromas of brioche and spice with flavours of citrus, lychee and ginger. The clean fruit flavours are bright, refreshing and exciting. 94.

CheckMate Fool’s Mate 2013 ($80). This is a 17-barrel blend from grapes grown in all of the three selected blocks. The complexity of the wine makes the case for the assemblage. The wine has aromas and flavours of brioche and melon, with a rich texture and a long finish. 95

Posted by JohnSchreiner at Goodgrog at 4:46 PM