Desert Hills carves out a style with big reds 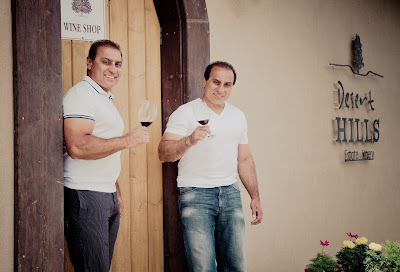 On every occasion that I taste the wines of Desert Hills Estate Winery, I am surprised at how extensive the portfolio is.

Of course, there is no need to be surprised. The Toor brothers – twins Randy and Jessie and younger brother Dave – farm 70 acres of grapes in the south Okanagan. They have access to numerous varieties and that has led to a large wine portfolio.

The winery occupies a former apple orchard on which the Toor family acquired in 1988. The following year, with the support of ’s Chaberton winery, they began replacing the apples with grape vines.

Once the vines started producing in 1996, the Toors not only supplied Chaberton but laid plans for their own winery. Desert Hills opened in 2003.

While the portfolio includes excellent white wines, it is reds that predominate at Desert Hills. Gamay Noir, an under-appreciated variety, was an early star here and remains consistently good. The Syrah invariably is bold. The Zinfandel would compare well with good California Zinfandels.

The Toors have paid special attention to the red varieties. The winery produced its first Meritage in 2000, built with Cabernet Sauvignon, Merlot and Cabernet Franc. Randy Toor recently opened one of the few remaining bottles of that wine. To his delight, the wine is still drinking well.

After several vintages of Meritage, Desert Hills decided to raise the bar by blending all five varieties. Randy has been impressed with the taste of Malbec wines from and the brothers were already growing the variety.

To get a supply of Petit Verdot, they grafted one and one-half acres of that variety onto the trunks of 12-year-old Cabernet Sauvignon vines.  “We had quite a bit of Cabernet Sauvignon,” Randy says. “I think we had about 80% success with grafting.”

In 2004, Desert Hills was able to make one of the Okanagan’s first blends with all five blends. (Randy has given some thought to planting the sixth, Carmenère.)

When that wine was released, it was called Mirage. “Everybody had a Meritage,” Randy says. “We wanted to get away from that name. We thought that Desert Hills is a winery in the only desert pocket. What do you see in a desert? A mirage.”

The current releases from Desert Hills include the winery’s first release of Petit Verdot on its on. It was an opportunistic release because, after the Mirage blend was done, there were several barrels of Petit Verdot left offer. A notoriously dark and concentrated wine, it fits right in with the Desert Hills style of big, bold reds.

Desert Hills Gewurztraminer 2014 ($22.90 for 1,300 cases).  This wine has strong varietal definition, with aromas of ginger and orange marmalade. On the palate, the fruit flavours are intense, with spice and lychee. The texture is lush and the finish is quite persistent. The wine is balanced to finish dry. 90.

Desert Hills Viognier 2014 ($24.90 for 650 cases). The wine begins with appealing aromas of apricot and cantaloupe. The palate has intense fruit flavours that include honeydew melons, citrus and apples. The finish is crisp and refreshing. Fermenting this wine cool, at 15C, preserved the fruitiness. 90.

Desert Hills Unoaked Chardonnay 2014 ($17.90 for 630 cases). As soon as you put your nose in the glass, you know that a well-made Chardonnay does not need oak. There is good varietal expression in the aromas of and flavours of citrus, ripe apple and peach. The wine has good weight on the palate, with a lingering, refreshing finish. 90.

Desert Hills Helena 2014 ($19.90 for 300 cases). This rosé is named after a beauty in one of Homer’s poems – a touch of sentimentality reflecting the Greek heritage of the Desert Hills winemaking team. The wine begins with an appealing salmon pink hue. It has aromas and flavours of strawberry and cherry, with a juicy weight and a savoury finish. The grape varieties are not identified. 89.

Desert Hills Cabernet Franc 2011 ($26.90). The slightly lean texture of the wine reflects a cool vintage. However, the wine appeals with aromas and flavours of raspberry and blackberry. 89.

Desert Hills Cabernet Sauvignon 2012 ($29.90 for 518 cases). Dark in colour, the wine begins with aromas of cassis, cherry and vanilla. On the palate, there are flavours of black currant with hints of leather and tobacco. The wine, which was aged 14 months in French oak, has disciplined age-worthy tannins. Decant this for current drinking. 90.

Desert Hills Gamay 2014 ($19.90 for 2,600 cases). Few wineries in the Okanagan have such a major commitment to Gamay Noir. Usually regarded as the junior partner to Pinot Noir, it produces some very drinkable wines. This is a bold, juicy red with aromas of black cherries. On the palate, there are ripe, spicy flavours of cherry and mocha. The finish lingers. 91.

Desert Hills Malbec 2012 ($34.90). This is a bold red, with jammy aromas of plum and mulberry that are echoed on the palate, along with lingonberry and exotic spice. The texture is almost fleshy. The wine is generous and immensely satisfying. 91.

Desert Hills Merlot 2011 ($24.90 for 1,200 cases). Four years of age have enabled this wine to develop complex aromas (cassis, blueberry, vanilla and spice). On the palate, there are flavours of black currant, blackberry and vanilla with hints of tobacco and mocha on the finish. It is an excellent Merlot from a cool vintage. 89.

Desert Hills Petit Verdot 2012 ($39.90 for 100 cases). The label says 15% alcohol but the wine is so concentrated and dense that one does not notice the alcohol.  Almost black in colour, the wine has spicy perfumed aromas of red fruit. On the palate, the flavours of plum, black currant and tobacco are framed by a graphite minerality. Drinking this spectacular and age-worthy wine before its seventh birthday would be infanticide. 92.

Desert Hills Syrah 2010 ($36.90 for 500 cases). This is a bold expression of the variety, with aromas and flavours of black pepper, black cherry, dark chocolate and espresso. There are appealingly rustic gamy and earthy flavours on the finish – the classic delicatessen spices and flavours of South Okanagan Syrah. Aging this wine 20 months in French oak polished the tannins and the texture. 91.

Desert Hills Zinfandel 2011 ($39.90 for 75 cases).  It may have been a cool vintage but, with good grape growing, the winery got this variety abundantly ripe. The alcohol is 14.7%. The wine has classic brambly Zin flavours of blackberry, blueberry, lingonberry and plum. The rich, ripe fruit give this wine a generous palate. There is some spice on the finish. 91.

Desert Hills Mirage 2010 ($36.90 for 300 cases). This is the winery’s flagship red. The blend is 40% Cabernet Sauvignon, 30% Merlot, 15% Malbec, 10% Cabernet Franc and 5% Petit Verdot. The component wines are aged about 18 months in French oak prior to making the blend. This is an elegant wine with silky tannins. It has aromas of black currant and black cherry. Those are echoed in the flavour, along with plum and dark chocolate. 93.
Posted by JohnSchreiner at Goodgrog at 10:19 AM