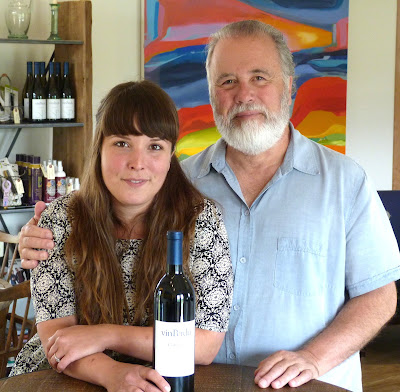 Despite its name, this new family-operated winery is hiding in plain sight behind its large highway-side sign.

If the branding is a little unusual, you should know that the owners, Ray and Wendy Coulombe, previously had successful careers in marketing and advertising.

With the help of two daughters, they are now pursuing a retirement career with their own winery for a reason similar to many peers: the lifestyle.

Ray was born in in 1945, the member of a pioneering family. His grandparents, Delphis and Marie-Claire, moved from in 1901 to a homestead near . Ray’s father, Frank, after operating a barbershop and pool hall, moved his family to when Ray was 10.

“We always drank wine,” Ray remembers. “When I was a kid, it was always homemade stuff – a white and a red. The white was dandelion wine and the red was made with saskatoons. But there was always wine at the table.” The wines improved in because the family had moved to a house with both fruit trees and grape vines in the back yard.

Ray’s ability as a writer and artist earned him a scholarship to an arts college in . When he approached an advertising agency in , he was advised to go to , with its greater opportunities. There he joined Maclaren Advertising in 1968; he was soon transferred to - much to his delight.

“I couldn’t believe what I saw in ,” he recalls. “Compared to , was full of colour. There were people on the streets at every hour. There were sidewalk cafes and people talking. Always next to them was a bottle of wine.”

He spent the rest of his business career there, first as creative director at Maclaren (Wendy joined as art director) and then with his own agency. That business was closed in 2001. Now drawn back to the West, Ray and his wife looked for a community in which to retire and found a house with a five-acre vineyard just south of Oliver in 2009.

The vineyard needed a lot of work before it could produce quality fruit. “We were the perfect victims to take this on because my wife and I were looking for a hobby,” Ray laughs. “We persevered and eventually we got grapes that were producing nice flavours.”

The next step soon suggested itself. “We were in that house, looking onto that vineyard below, and I thought there should be a winery at the highway,” Ray says. “If my grapes taste good, that’s what we will do.”

He arranged to have wine made from his grapes in 2013. The winery was built in 2014. The area occupied by the winery and tasting room replaced a struggling Merlot block that had been planted in a frost pocket.

The vineyard now has Chardonnay, Pinot Gris, Cabernet Sauvignon and Gamay Noir. The style of the debut wines is deliberately fruit-forward with supple and easy-drinking tannins. The winery’s Gamay is a good example.

“I couldn’t wait to start this winery for the reason of the Gamay alone,” Ray says. “I saw it very much to be in the style – not a heavy red, not sitting in the barrel forever. Since we are talking fruit forward, this would be lightly touched in oak. It is all fruit and should be chilled a bit for summer drinking.  Instead of having a white wine on the back porch, you can have nice ‘’ from the valley here that isn’t heavy.”

Ray and Wendy’s two daughters (and their partners) also have become involved in vinPerdu. Catherine, who formerly had a catering business in , now manages vinPerdu’s wine lounge and is mentoring with a winemaking consultant. Nathalie, who has become a vineyardist, is an artist and displays her excellent work in the tasting room. One of the strong appeals of this winery is the warmth of the Coulombe family, one or other of which usually is on hand to greet visitors.

vinPerdu Pinot Gris 2014 ($20.90). This is a crisp and refreshing white with aromas and flavours of citrus, honeydew melon and apples. 90.

vinPerdu Chardonnay 2013 ($27.90 for 89 cases). This is the peaches and cream style. The 12 months on lees in French oak have given the wine an appealing texture. The wine has citrus aromas and tropical flavours with a hint of butterscotch and very subtle oak. 90.

vinPerdu Gamay Noir 2014 ($27.90 for 101 cases). This is a juicy, refreshing wine with aromas and flavours of strawberries and cherries. The silky texture adds to the charm. 90.

vinPerdu Cabernet Franc 2013 ($28.90 for 108 cases). Light ruby in hue, this wine again has silky tannins that underline the drinkability style of all the wines. There are aromas and flavours of raspberry and blackberry with a touch of oak from the 12 months the wine spent in barrel. 89.

vinPerdu Compass 2013 ($29.90 for 67 cases). This is a blend of 66% Cabernet Sauvignon and 33% Merlot. It has aromas and flavours of black currant, cherry and blueberry. The juicy texture and the savoury fruit flavours underline the house style: wines that are accessible. 90.

Posted by JohnSchreiner at Goodgrog at 10:03 AM