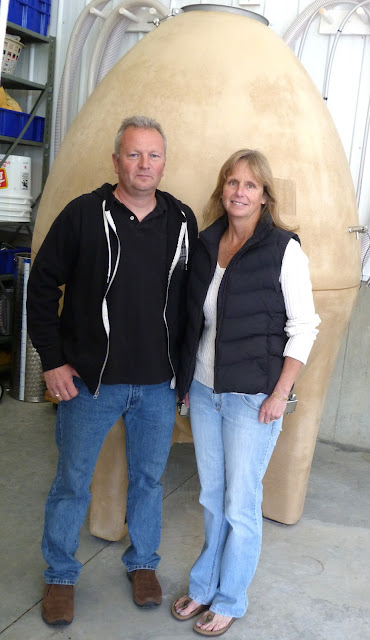 Lariana Cellars, the Osoyoos winery that is a literal stone’s throw from the border, now has released its entire portfolio.

That is just two wines, but what marvellous wines they are.

The winery is owned by Dan and Carol Scott. The winery is just three years old but Carol has a much longer connection to BC wines.

As a teenager when she spent several summers working in the Shannon Pacific Vineyard on . Her father, Larry Franklin, was one of the vineyard’s owners. Until the hybrid grapes were pulled out in 1988, Larry and Carol picked some for home winemaking in the family’s home. That vineyard, replanted with premium vinifera, now belongs to several top wineries.

In the late 1960s, not long after Shannon Pacific was planted the first time, Larry Franklin also bought a four-hectare (10-acre) Osoyoos orchard property with what was then called the Shady Lagoon Campsite on the lake. Dan, a machinist, and Carol, a travel agent, took over the property in 1989. They still operate the lakeside recreational vehicle camp. Growing cherries and apples became uneconomic and the trees were pulled out in 2006. “It was kind of my dream to plant grapes,” Carol says.

Since 2007, they have planted 1.8 hectares (4.5 acres) of vines. The largest block is Cabernet Sauvignon, followed by Carmenère and Viognier. Accordingly, the winery’s red blend is anchored by Cabernet Sauvignon. The Merlot and the Syrah fleshing out the debut blend are purchased from nearby growers because Dan and Carol’s vineyard is fully planted. They have no current plans to double production by turning the campground into vineyard.

The modest winery is very well equipped. Lariana was one of the earliest wineries in the Okanagan to install an 1,800-litre concrete egg for fermenting and aging wine. This vessel, made in , is used to ferment Lariana’s Viognier. The reds are fermented in small stainless steel tanks and aged in oak barrels.

Lariana’s winemaking consultant is Senka Tennant. She was the founding winemaker with . Currently, she is the co-proprietor and winemaker at Terravista Vineyards.

Lariana’s decision to limit its red portfolio just to a premium red called Twelve echoes Senka’s strategy at . That winery opened in 2001 with a blend called Nota Bene, which quickly became, and remains, an Okanagan icon.

Intrigue Winery in used a similar strategy for a number of vintages of a white wine. Eventually, the owners found that unwieldy and rebranded the wine. It will be interesting to see if Lariana makes it work.

Lariana Cellars Viognier 2014 ($23). This is the third vintage of Viognier from Lariana and it confirms the winery’s excellence with this varietal. This is an exquisitely balanced wine where the 13.9% alcohol is kept in check by the flavours, the texture and the refreshing acidity. The wine has aromas of lime and white peach with a floral note reminiscent of violets. On the palate, there are flavours of lime and melon with a hint of spice on the long, refreshing finish. 93.

Lariana Cellars Twelve 2012 ($44.90 for 480 cases). This is a blend of 53% Cabernet Sauvignon, 25% Syrah, 21% Merlot and 1% Carmenère. The wine was aged 18 months in oak (90% French, of which 45% was new). Dark in colour, the wine begins with dramatic aromas that jump from the glass – plum, black cherry, chocolate and spice. This is echoed on the palate, which delivers a delicious array of sweet red and dark berry flavours. The ripe tannins give the wine a generous and satisfying finish. 91.

Posted by JohnSchreiner at Goodgrog at 1:46 PM