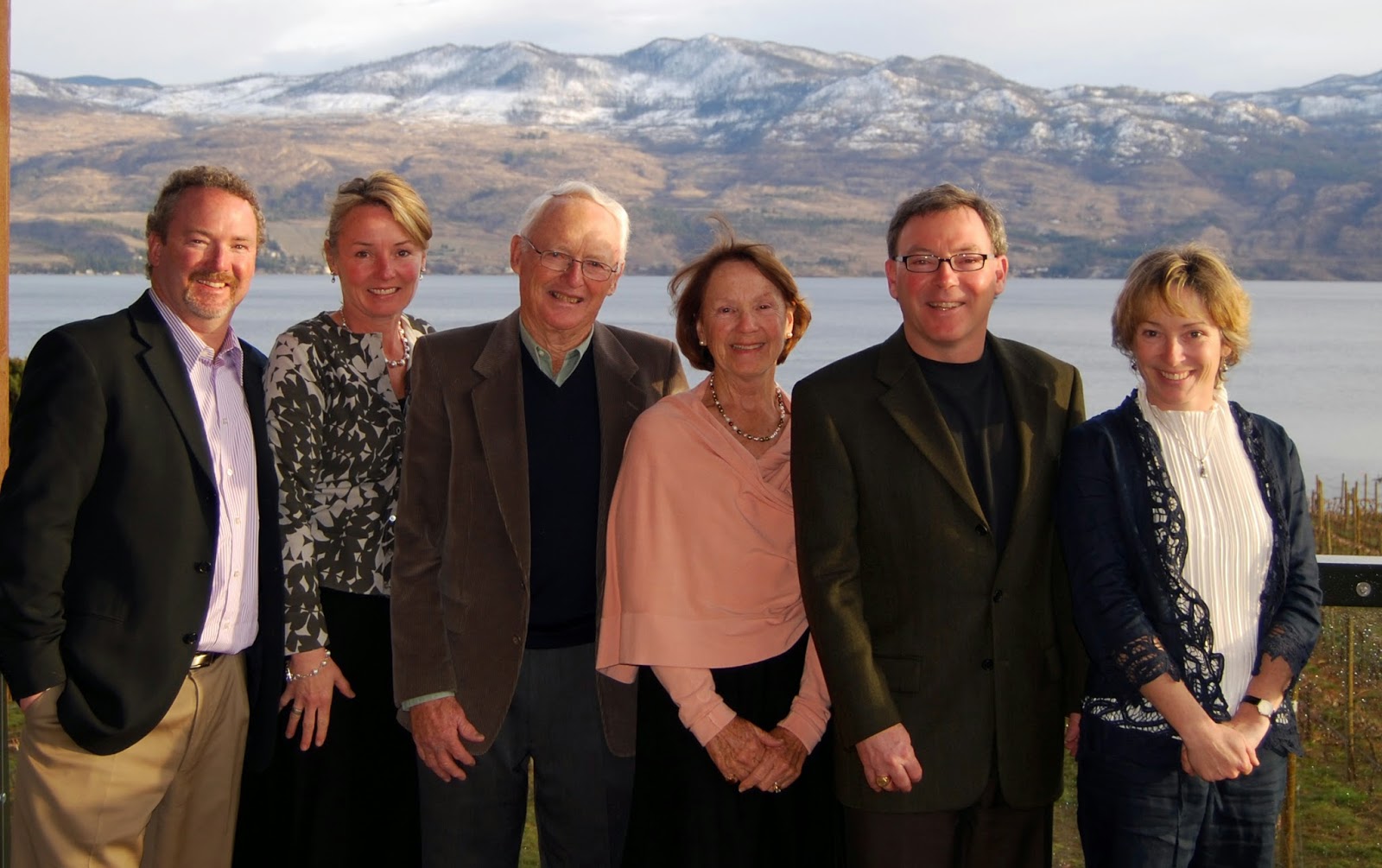 Considering that Quails’ Gate Estate Winery is one of the Okanagan’s great success stories, it is surprising to find that the Stewart family could not get bank financing to open the winery in 1984.

That was an historical nugget in The British Columbia Wine Companion, my 1996 book in which I gathered a great deal of industry history. The book is out of print but the manuscript lives on my computer. A search on the Stewarts resulted in a remarkable number of hits. This is a family that has been, and continues to be, a major force in the province’s viticulture and wine industry.

Ben Stewart opened Quails’ Gate in 1989 as a “farmgate” winery. That license had just been created by the provincial government primarily for small vineyards. In the commercial chaos after the 1988 free trade agreement, many growers had trouble finding wineries prepared to contract their grapes because the future looked so bleak.

A farmgate winery only needed four acres of vineyard. The Stewarts had far more acreage than that but it was a way for Ben to dip his toe in the water. Within two years, Quails’ Gate was transformed into an estate winery (minimum 20 acres of vineyard) and the winery has never looked back.

To put Quails’ Gate in some perspective, here are several biographical profiles from the Wine Companion, starting with Richard Stewart, the father of Ben and Tony. Ben subsequently went into public life, first as a member of the B.C. legislature and now, as ’s trade representative in Asia, based in . Tony, his younger brother, succeeded him as winery president several years ago.

The Stewarts and their spouses were all at the winery’s recent 25th anniversary celebration, toasting their accomplishments with for remarkable wines made just for the anniversary. I will review them at the end of this.

This mini-biography was written after a 1995 interview with Richard Stewart.

Stewart, Richard (1926-): A member of a family prominent in Okanagan agriculture almost since the beginning of the twentieth century, Richard Stewart  first planted grapes in 1961 on  property now part of the Quails' Gate vineyards. As well, he formed a partnership with Calona Wines to establish Pacific Vineyards, which leased land from the Westbank Indian Band for a vineyard and bought land south of Oliver for a second vineyard. "We believed there was room for growth in the wine industry," Stewart recalled later. Initially he planted what were then considered the established varieties -- such North American labrusca grapes as Diamond, 's Early, and Patricia. A nursery in Seattle, one of his suppliers, misidentified a shipment of what should have been 10,000 Diamond vines. Stewart discovered when the vines were growing that he had been shipped Chasselas, a vinifera vine that produces far superior fruit than Diamond. "We left them in," Stewart chuckled.

In 1964 he and Joe Capozzi (in the latter's private aircraft) flew to grape-growing areas in and state to choose varieties for the initial Pacific Vineyards plantings the following year.  At Gold Seal Vineyards in , one of the early vinifera growers, they found that the previous winter had devastated the vines. That convinced Stewart and Capozzi to play it safe, planting the more hardy hybrid varieties, including De Chaunac, Chelois, Verdelet and Maréchal Foch. After managing Pacific Vineyards for several years, Stewart sold his interest to Calona Wines and concentrated on developing the vineyard near Westbank that now supports Quails' Gate.

Stewart was a founding member in 1961 of the Association of Grape Growers (with Frank Schmidt and Martin Dulik), set up to lobby government for favourable policies. He was not an original member of the Grape Growers' Marketing Board but soon joined this price-negotiating body and subsequently became its chairman.  Interested more in grape growing than winemaking, Stewart encouraged his son Ben to establish Quails' Gate.

The book included vignettes on Ben and Tony as well.

Stewart, Ben (1957-): One of the owners of Quails' Gate winery, Stewart was born in , a member of a family which emigrated in 1906 from and has been prominent ever since in Okanagan agriculture and business. After working in the vineyards operated by his father, Richard, Ben Stewart graduated from high school to spend the next five years as a banker in and Kitimat. He rejoined the family business in 1979 when the Stewarts began planning an estate winery. Lack of banking support frustrated the Stewarts in 1984 but five years later, Ben Stewart was among the early applicants for a farmgate winery license. A risk taker, Stewart crushed enough grapes that fall for 5,000 gallons of wine before he even had his license. Quails' Gate subsequently converted to an estate winery.

Stewart, Anthony David (1966-):  The business manager at Quails' Gate, Tony Stewart chuckles ruefully at the warning that his fellow workers gave him in 1986 when he quit the first full-time job he had had after high school -- that of a technician in the ore processing plant at Cominco Ltd.'s Polaris lead-zinc mine  north of the . "They said I would never earn as much money anywhere else," Stewart recalls. Indeed, a decade later the family winery was not paying him nearly as well as the mine; the compensation is in the evident satisfaction Stewart  draws from what is already the third career in his young life. When he left the mine, Stewart took a financial management diploma at the British Columbia Institute of Technology and then joined the brokerage firm Burns Fry & Co. in where he became a commodities trader. In search of the Okanagan lifestyle, Stewart returned to in 1992, intending to resume a broker's career there. However, Quails' Gate had just lost its accountant; Tony Stewart stepped in temporarily and stayed on to handle sales and distribution as well as administration. And the winery's prospects have brightened considerably, sales having risen from 8,000 cases in 1992 to 22,000 cases in 1995.

As noted earlier, Tony has since become president. The winery has more than doubled its case sales. And the Stewarts have entered into a major winery joint venture in and in .

The signature wine at Quails’ Gate is Pinot Noir, the result of Richard Stewart taking a chance on planting the variety in 1975. It was the first successful Pinot Noir planting in the Okanagan, if not in all of .

In the winery’s early years, Ben relied on consultant Dr. Elias Phiniotis, a Hungarian-trained winemaker who came to in 1976 and who has worked for a remarkable number of B.C. wineries since. Beginning in 1994, Quails’ Gate turned to a succession of winemakers from the southern hemisphere: Jeff Martin, followed by Ashley Hooper in 2000 and Grant Stanley in 2003. He was succeeded last year by Nikki Callaway, a young Canadian winemaker trained in .

And there was, briefly, an Australian Pinot Noir specialist named Peter Draper who came to Quails’ Gate in the summer of 1999. His sudden death in the middle of the 1999 vintage plunged Quails’ Gate into crisis. The winery still had tanks and barrels full of fermenting wine.

In a remarkable story of winery collegiality, the CEO of Thomas Hardy & Sons in heard of the crisis (because Hardy and Quails’ Gate shared an agent in ) and sent two of his winemakers to get Quails’ Gate through the 1999 vintage.

In 2002, Quails’ Gate helped another winery in a similar crisis. Frank Supernak, the winemaker at , died in an accident at another winery that November. The Stewarts sent Ashley Hooper, their winemaker, to help complete its wines.

One might argue that there is something of a style in the Quails’ Gate wines, given the decade that Grant Stanley made wine here. However, the style is really set by the winery’s excellent vineyards, which deliver quality fruit to Nikki Callaway (right), the new winemaker. She has begun to show that, as excellent as the wines have been, she is finding more upside.

Born in in 1982, Nikki is the daughter of a physician who worked for many years in and . Nikki lived in for 10 years until she was 14 and had completed elementary school. At that point, her family moved to so she could complete high school.

She came back to f0r a bachelor’s degree in microbiology at the . She had not mapped out a career path although she was interested in wine. “Dad talked me out of medicine,” she recalls. “He thought I would have more fun drinking wine.”

So she went to in 2004 and picked grapes for two months while checking out French wine schools. She chose the and graduated in 2007 with a Diplôme National d’Oœnologue (in spite of a chauvinist professor who kept trying to make her cry).

The winemaking program included hands-on cellar work in French wineries. Upon graduating, she worked about five months in a French winemaking co-operative. Then she went to to do a crush there before returning to and doing another crush at a winery.

She might have stayed in but she could not get a work visa. So she returned to in 2009 where Mission Hill offered her a four-month job. “It turned out to be four years,” she says. She moved to Quails’ Gate in mid-2013. 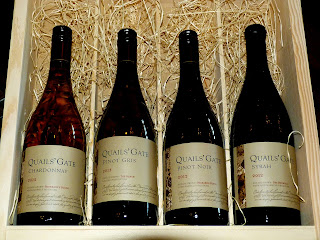 The four wines in the just-released Anniversary Series include one wine made entirely by Nikki and three that she finished. These are limited production wines available only at the winery and to members of the Quails’ Gate Cellar Door Club.

Rosemary’s Block Chardonnay 2012 ($30 for 80 cases). This elegant wine was fermented in new French oak. However, the oak stays subtly in the background, with bright flavours of citrus and apple on full display. The wine’s good acidity gives this Chardonnay a crisp, refreshing finish. 91.

The Bench Pinot Gris 2013 ($25 for 790 cases). There is a laser-like focus to the aromas and flavours of this wine. There is citrus, apple and pear. The generous texture reflects the fact that 15% of this wine was aged in oak. However, there is no hint of oak on the palate. Nikki is not a fan of oaky wines. 91.

Richard’s Block Pinot Noir 2012 ($40 for 80 cases). The wine begins with delicate aromas of cherry and strawberry, leading to flavours of raspberry and strawberry. The wine is still firm, with hints of the developing silky texture that will come with another year in bottle. 90.

The Boswell Syrah 2012 ($40 for 320 cases). This memorable wine took everyone by storm during the various 25th anniversary functions, if only for the surprise factor. This is, if memory serves, the winery’s first Syrah and it comes from a special lakeside plot at the Quails’ Gate vineyard in . It is a delicious wine, medium-bodied like a northern red, with earthy flavours of black cherry and plum, bracketed by pepper in the aroma and on the finish. 91.

Posted by JohnSchreiner at Goodgrog at 2:07 PM