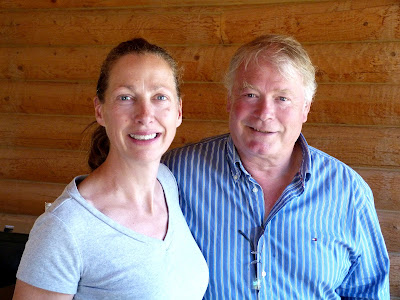 The vineyard that is home to the recently opened Platinum Bench Estate Winery stood apart over the years as the only one with scarecrows guarding the ripening grapes.

Whether the scarecrows – the idea of the previous owners – deter the birds is debatable. But they add such character to the vineyard that they have been retained by Murray Jones and Fiona Duncan, who bought the property in 2011 to develop this winery.

Platinum Bench opened its pleasant wineshop in late May to serve its first three releases. Guests who choose to linger can take advantage of seating on a westward-facing beck behind the wineshop, with great views on the vineyards and the valley. They also get to taste the wines from stemware so good that I took it to be Riedel wine glasses.

Fiona chuckled at that. “Two dollars a stem at Costco,” she said. She certainly got a great deal.

The winery is a second career for Murray and Fiona, who moved to the Okanagan from . The idea of starting a winery came to them a dozen years ago during a cycling vacation through the vineyards of . “It was one of those ‘ah ha’ moments when we were out in the vineyards,” Fiona remembers. “What an incredible reality that somebody has this as their lifestyle!” But they returned to their fast-paced business lives in . It took an Okanagan vacation seven or eight years later rekindle the idea. 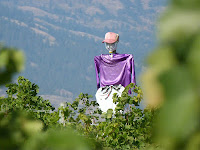 Murray, who was born in in 1954 and graduated initially in zoology, became a chartered accountant to pursue a successful career in manufacturing (buses, garments, tents for the military). Fiona, who was born in 1962 and grew up in , met after she went to in 1988. She spent a number of years as vice-president of production development for Nygård International, a major garment designer and manufacturer.

“We’ve always had a keen interest in wine,” Fiona says. They absorbed knowledge from ’s sister, Tina Jones, a wine educator and owner of a wine store called Banville & Jones. They both supplemented their knowledge by taking the first level of sommelier training. Many of the wines they purchased in were from ; gets only a limited selection of wines. They were astonished at the quality of wine in the south Okanagan when they vacationed there. They were especially impressed by a bottle of Cabernet Sauvignon from Road 13.

“We started talking to the people who owned the wineries,” Fiona says. “Here were people who had taken this on as a second career. We started thinking maybe this could be our reality as well.”

They researched the wine business for a couple of years before buying the vineyard on . It had been established by Regine Mauz and Gerhard Hammerl, who also originated the scarecrows.

With an eye to having red wine when winery opened, Murray and Fiona bought red grapes in 2010 from Harry McWatters’s Sundial Vineyard, nearby on , and arranged to have the wine made for them. They took over their vineyard in 2011. 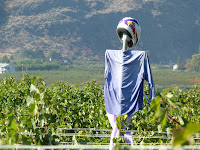 The 5.6-hectare (14-acre) vineyard, about 15 years old when they bought it, grows Chardonnay, Pinot Gris, Merlot, Cabernet Sauvignon, Merlot and Gamay. Some of the grapes are being sold while the winery is getting established in the market. The white wines were made on the property in 2011 while the reds were made at Okanagan Crush Pad’s winery, all under the hand of Michael Bartier, the winemaker who made that Road 13 Cabernet Sauvignon that so impressed the Platinum Bench owners.

In addition to the three debut wines, a Gamay Noir is going to be released this fall. These are the wines.

Platinum Bench Chardonnay 2011 ($24.90 for 350 cases). The wine has a very subtle oak treatment, leaving centre stage to the fruit – a style appealing to the many who like fruit-forward Chardonnay. This wine begins with vibrant citrus aromas, leading to fresh citrus and apple flavours, with just a hint of oak. The bright acidity gives the wine a refreshing finish. 89.

Platinum Bench Bench Mark Red 2010 ($29.90 for 300 cases). This is a blend of 42% Cabernet Sauvignon, 42% Merlot, 8% Cabernet Franc – and 8% Gamay Noir. “The Gamay softened the blend,” Fiona explains. It is a delicious wine with aromas of cherries and blackberries and with flavours of cherries and blueberries. 89.
Posted by JohnSchreiner at Goodgrog at 1:58 PM