The 2012 Lieutenant Governor's Awards for Excellence 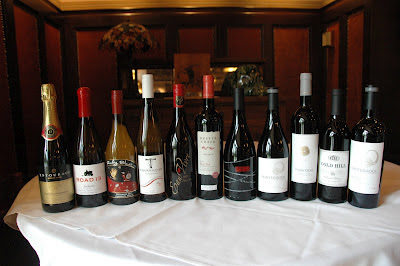 Photo: The winning wines displayed at Government House in Victoria

Begun 10 years ago, the Lieutenant Governor’s Awards for Excellence in British Columbia Wines has clearly established itself as a major wine competition.

This year, 94 wineries entered 347 wines. Both figures are new records. Only 30 wineries took part in the first year. This year, eleven wines from 10 producers emerged as winners in this rigorous competition.

The awards were inaugurated by Lieutenant Governor Iona Campagnolo and continued by her successor, . One of the concluding events of his five years in the office will be his tour to each of the winning wineries in late July to make the awards in person.

Several details set this competition apart from all the other provincial and national competitions.

To begin with, wineries pay no entry fees.  Wineries are so accustomed to paying to enter wines in competition – sometimes hefty fees – that at least one excellent Okanagan winery skipped the Lieutenant Governor’s Awards, thinking there was also a fee.

Secondly, there are no silver or bronze medals or honourable mentions. This is meant to enhance the awards that are given. There are seldom more than a dozen awards given each year.

Thirdly, this is the only competition in in which the awards are handed out by the representative of the Crown – just in case anyone thinks this is not a big deal.

This year, the six judges split into two panels and, during a day and a half of tasting, selected about 40 wines for the final round of judging. From that already astonishing distillation of quality, the judges, now in a combined panel, chose the final winners.

Full disclosure: I am one of the wine judges. I was impressed with the consistency of quality among all the wines and by the promise shown by Cabernet Franc, Pinot Noir and whites.

These are the winners in 2012. The tasting notes and point scores are my own, not those of the rest of the panel.

EauVivre Winery Pinot Noir 2009 ($19). A first-time winner, EauVivre is a winery near Cawston that was opened in 2009 by former Saskatchewanians Jeri Estin and Dale Wright. This is an elegant and polished wine, light in hue but silky in texture, with aromas and flavours of raspberry and mocha. 89.

Gold Hill Winery Cabernet Franc 2009 ($25 and nearly sold out). This is a first LG win for a winery that just opened last year midway between Oliver and Osoyoos on the Golden Mile. The wine is big and juicy, with aromas of cassis and blueberry, and flavours reflecting those fruits along cherry and spice on the finish. 91.

Hester Creek Estate Winery Reserve Merlot 2008 ($26.99). This is, if memory serves me, the first win by one of the oldest of Okanagan wineries. The award underlines the profound turnaround here since Curt Garland bought it in a bankruptcy auction in 2004 and then hired a veteran winemaker, Rob Summers, in 2008. This is a bold, concentrated wine made with grapes from vines planted in the 1970s. It begins with aromas of vanilla and blackberry and has flavours of plum, black currant, mocha, with a hint of coffee. 91.

Jackson-Triggs Entourage Sparkling Chardonnay 2008 ($29.99). This winery is a multiple winner of the Lieutenant Governor’s Awards, but never before with a sparkling wine.  Winemaking for this wine began with barrel-fermented Chardonnay which was then re-fermented in bottles and allowed to spend two years on the yeast lees before being disgorged. As a result, there is an appealing toasty note on the aroma and the palate, along with citrus flavours and a creamy texture. 90.

(I recently tasted the 2009 Entourage, which is soon to be released, and I found it even a better sparkling wine.)

Laughing Stock Vineyards Syrah 2010 ($34). This Naramata Bench winery is a repeat winner of this award; last year, it won with a Pinot Gris. This wine is made in the classic Côte Rotie style, blending 94% Syrah with 6% Viognier. The grapes are grown near Osoyoos, superb Syrah terroir. The wine has white pepper on the nose, with a touch of that on the palate. Big and generous, the wine tastes of plum and black cherry. 90.

Painted Rock Estate Winery Syrah 2009 ($40). Painted Rock, an area winery, also won two awards in this competition two years ago. This Syrah also is developing a track record for awards, having won silver at the 2012 Syrah du Monde competition in . The wine begins with an almost jammy aroma of ripe fruit. It hits the palate with a big scoop of black cherry, fig, plum, chocolate and liquorice. 92.

Painted Rock Estate Winery Red Icon 2009 ($55). This wine was named the best red in in last fall’s Canadian wine awards. This is the third vintage of Red Icon, a blend of all the varieties except Malbec, but also with a dash of Syrah in this vintage. It begins with aromas of spice, blackberry, black currant and dark cherry. It shows a rich texture with flavours of berries, plums, dark chocolate and vanilla. This is a wine with power and elegance. 94.

Poplar Grove Winery Cabernet Franc 2009 ($35). This winery, which first made a name for itself with Cabernet Franc, is another repeat winner of this award. This is a classic example of the variety – lots of brambly berry aromas and lots of raspberry, cherry and red currant on a palate, which is full-bodied. 91.

Road 13 Vineyards Jackpot Viognier Rousanne Marsanne 2011 ($29). This winery is a repeat winner, having also won under its previous name, Golden Mile Cellars. Winemaker J-M Bouchard fermented these three varietals together when they arrived at the same time on his crush pad. It certainly made a harmonious and cerebral wine, crisp on the palate, with aromas of citrus and stone fruit and with a bowl of tropical fruit flavours. 91.

This blend may be available only at the winery; it does not appear on the winery’s web site order form.

Ruby Blues Winery Viognier 2011 ($25). This award is a first for Ruby Blues but not for proprietor Prudence Mahrer. When she and husband Beat owned , they won two awards, both with Gewürztraminer. This wine was made with grapes from the Ruby Blues vineyard and from the vineyard of Lyndsay O’Rourke, the winemaker at Ruby Blues.

This crisp and refreshing white begins with aromas of citrus and stone fruit and delivers flavours of citrus and pineapple, with a spine of minerals that give the wine a laser-like focus. 91.

Thornhaven Estates Winery Gewürztraminer 2011 ($17.90). Thornhaven is a repeat winner of this award and has made a reputation for its excellent Gewürztraminer. This is a wine with superb varietal expression: spicy aromas, rich flavours of lychee and tangerine and just enough residual sugar to give it a plump, honeyed finish. 91.

Posted by JohnSchreiner at Goodgrog at 9:12 AM