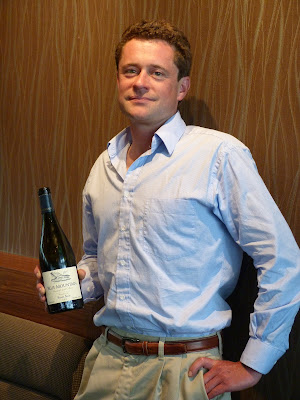 Matt Mavety, the winemaker at Blue Mountain Vineyards & Cellars and one of the family that owns it, was in recently, autographing bottles in several leading private wine stores.

Autographing bottles of ? I’m not kidding.

In the last two or three years, there has been a sea change at . This occasionally reclusive winery sometimes refused to receive visitors without appointments, only making exceptions during wine festivals. They earned an unfortunate reputation as curmudgeons.

To be fair, the Mavety family is not that large. They were too busy in growing grapes and making the wine at to drop everything whenever a car came down the driveway. But since last year, the family has freed up the time to open the wine shop from April to October and to send family members out more often on promotional tours.

And after staying out of most industry associations for years, this year has joined the 12-member Okanagan Falls Wineries Association, to the absolute delight of its peers. This summer, the winery is even doing three luncheons in its vineyard with Joy Road Catering.

Everybody benefits when a winery as important as decides to join the parade, and perhaps even lead it, after years of appearing to stand aside.

The winery has never been quite as inaccessible as its reputation suggested. Getting an appointment to visit was as simple as making a phone call to the winery. If the tasting room was not always open, it often reflected the fact most of the wines were sold out anyway.

The winery has participated several times in the Vancouver International Wine Festival. During the past decade or two, the winery often has sponsored an annual charitable fund-raising wine tasting that featured its wines paired with dishes from top restaurants. It has always been one of the hottest tickets on the wine scene.

There are, however, at least two reasons why has been raising its profile lately.

One is a generational change. Matt and his sister, Christie, have taken on greater roles at the winery that was launched in 1992 by their parents, Ian and Jane Mavety.

The second is the dramatically increased competition in the B.C. wine market. came out of the gate with the best wines in the Okanagan by a considerable margin. Every good restaurant and every savvy wine consumer wanted this smart new label in the cellar.

didn’t have much competition in 1992. No other winery’s Pinot Noir came anywhere close to . They did not have to list their wines in liquor stores because their clients bought it directly and by the case. Jane would fax or email customers whenever there was a new release. The wines would be sold out in a week. People got on a waiting list just for the privilege of ordering.

That was then. Today, there are a number of producers with wines that can play in the big leagues with . Other excellent Pinot Noirs are now being made by Quails’ Gate, CedarCreek, Foxtrot, Howling Bluff, La Frenz, , Meyer; and the list could be longer. I am told that Mission Hill is working on a stunner.

That, I think, is why , now making 15,000 cases a year, has made it far easier to buy its wines, which, by the way, are still reasonably priced. The winery’s Pinot Noir Reserve is $10 to $20 a bottle cheaper than most reserve quality Pinots while matching them for quality. The winery’s regular Pinot Noir at $25 is superb value.

’s wines, so consistent over the years, are better than ever. Even though the Mavety family has been growing grapes for 40 years, they have never stopped improving their viticulture.

As well, Matt has continually tweaked his winemaking techniques over the past decade. An agriculture graduate from the of (like his father), Matt began working fulltime at in 1997 after completing viticulture and enology studies at in .

In 2001 he began trials with fermenting with natural yeast. Today, as much as half the volume of some varieties is fermented with natural yeast. While that can be a risky technique, it does yield more complex wines in the hands of a skilled winemaker.

I have tasted some wines that have just been released or will be released in a matter of weeks. They all impressed me with their elegance and complexity. Here are my notes.

Gold Label Brut N.V. ($24). This excellent bottle-fermented sparkling wine is a blend of 61% Pinot Noir, 36% Chardonnay and 3% Pinot Gris. The two years that the wine rested on its lees has given this a Champagne-like toasty note on the aroma (along with citrus) and on the palate. The wine, with lively and persistent bubbles, is crisp and dry on the finish. With just 12.5% alcohol, the wine is ever so easy to drink. 92.

Sauvignon Blanc 2011 ($18.90). To be released in July, this is the winery’s third vintage of this varietal. The style is more like Sancerre that – but then has always taken its inspiration from the . This is crisp and herbal on the nose and on the palate, with citrus and mineral flavours. Half of this wine was fermented with natural yeast; about a third was fermented in older barrels, primarily to enhance the texture.  90.

Pinot Blanc 2011 ($17.90). This is another July release. Again, a portion was fermented with wild yeast and in older barrels, but just for texture. The fruit aromas and flavours here – lots of green apple – are crisp, clean and brightly focused, with a lingering finish. This is a great seafood wine. 91.

Reserve Pinot Gris 2009 ($25.90). The winery’s reserve wines also are referred to as Stripe Label because there are light stripes on the label. This wine is made with grapes from vines that were 22 years old in 2009. Forty per cent was fermented and aged eight months in a combination of new and older French oak barrels, with the rest done in stainless steel. The fruit aromas and flavours are rich – tangerine and pear come to mind – and the oak is very subtle. The style recalls the elegance of good Alsace Pinot Gris. 92.

Reserve Chardonnay 2009 ($25.90). This wine was made with grapes from vines that were 20 years old in 2009. About 55% was fermented and aged eight months in a combination of new and older French barrels. Only 15% of the wine went through malolactic fermentation, just enough to add a buttery note to citrus aromas and flavours. The understated use of oak and the moderate alcohol (13.5%) add up to a Chardonnay that is fresh and lively on the palate. 93.

Pinot Noir 2010 ($25). Released in March, this is the winery’s regular, or Cream Label, Pinot Noir. Dark in colour, it begins with an appealing aroma of strawberry, raspberry and cherry. The fruit flavours, mostly cherry, are terrifically vibrant. The texture is firm out of the bottle but with breathing or decanting, this begins to show the silky, fleshy texture of Pinot Noir. 91.

Reserve Pinot Noir 2009 ($35.90). There are four clones of Pinot Noir from vines 12 to 25 years in this wine. Half of this wine was fermented with natural yeast. The wine spent 10 months in French oak before being bottled, adding texture without much flavour of the wood. The fruit flavours – strawberry and cherry and spice – are too lovely to put them behind wood. This is a cerebral Pinot Noir of considerable elegance. 92.

Posted by JohnSchreiner at Goodgrog at 3:57 PM

You can buy these wines from their website: www.bluemountainwinery.com

You could always buy the wines from the website, by the case, but you could not get one or two bottles in private wine stores until the last few years.

We're discussing this over on my LinkedIn group - Wine Bloggers, Lovers and Enthusiasts...