Class of 2016: The Similkameen Collective 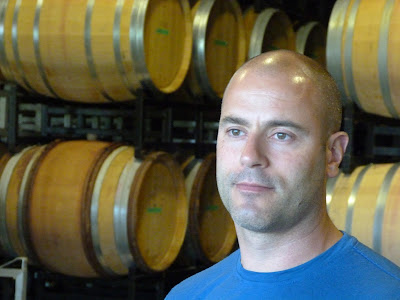 The wines are anchored on fruit from the 100-acre Blind Creek Vineyard, one of the most highly regarded vineyards in the Similkameen Valley. Winemaker J-M Bouchard first made wine from Blind Creek fruit for Road 13 Vineyards soon after he joined Road 13 as the winemaker in 2011.

The enthusiasm he developed for those grapes appears to have been a trigger leading to the formation of the Collective. The first four wines, all in limited quantities, are now finding their way into the market. The pricing is aggressive ($35 to $60 a bottle) but the quality is there to back it up.

Blind Creek, which was developed 10 or 12 years ago, is owned by Larry Lund (former owner of Okanagan Hockey School in Penticton) and his friend, businessman Ron Bell. These gentlemen, along with Penticton builder Jim Morrison, hold one-quarter interest in the Similkameen Collective. A quarter is owned by Road 13 and a quarter is owned by J-M. The final quarter is held by Vancouver wine merchant Brian Berry.

“We are looking at this as an opportunity to bring something really special into the market,” Brian says. “We are not looking at the accounting team for when this gets released. The quantities are extremely limited. It is about doing something special that honours the Blind Creek Vineyard, ideally making a high water mark for wines from the Pacific Northwest.”

“If there is a vineyard which is going to stand out in five, 10 years in B.C., that will be it,” J-M told me two years ago as the Collective was being formed. “I was tasting the 2013 Syrah one night beside the RWT Barossa Shiraz from Penfolds.” (J-M once worked at that renowned Australian winery). “For power and concentration, our Syrah killed it. Five of us were tasting the wine and the reaction was, oh my God! I am not saying it is better, but it had more power.”

That speaks for the benchmark that he has set for the wines from the Similkameen Collective – a standard he thinks he can achieve.

“If I didn’t feel we had special fruit, I would not have wanted to start a brand,” J-M says. “The fact that the owners of Blind Creek are on board with us was one thing that made me want to have a brand. I knew that the fruit was outstanding. Everybody battles to get more grapes from that vineyard and a few people want to purchase the vineyard.”

The early plans for the vineyard involved the development of a winery. The owners of the vineyard retained Lawrence Herder, then a winemaker and consultant in the Similkameen, to create a business plan in 2009. For undisclosed reasons, the winery did not proceed and the owners since have sold grapes to numerous wineries, including Road 13.

The Similkameen Collective seems a first step in realizing those early plans. It is, however, a “virtual” winery in that no winery has yet been built on the vineyard. The wines are made and sold under Road 13’s license.

J-M is a native of Sherbrooke, Quebec. He developed a passion for wine after studying business and hotel management and working in Montreal hotels. In 1998, he went to Australia, enrolling in Charles Sturt University’s winemaking program. While there, he got hands on experience working with Penfolds and with a smaller premium producer called Torbreck Vintners.

“I worked at Torbreck in 2002 and learned to co-ferment Syrah with Viognier,” J-M recounts. “I even fell into the tank there, with a smile, while doing some pump overs.” Why the smile? Because he thinks the wine in that tank eventually was released at $200 a bottle.

After Australia, he spent some time in various European vineyards. Then he came back to Canada to work with Sumac Ridge Estate Winery before moving to Ontario’s Hidden Bench Winery. He returned eagerly to British Columbia when Road 13 recruited him in 2011. From his first vintage here, he concluded that the best fruit in the cellar came from Blind Creek.

Some of Road 13’s top wines, including at least one winner of a Lieutenant Governor’s Award of Excellence, were made with grapes from Blind Creek. (That is not to take anything away from the quality of fruit coming from Road 13’s excellent Golden Mile vineyards.)

“It doesn’t look like a pretty vineyard,” J-M says of Blind Creek, which is on the east side of the Similkameen Valley, south of Cawston. “But it is the last place to get the sun. It is against the mountain. There is a decent slope and the soil is fabulous.”

The initial release of wines from the Collective is about 500 cases. For now, the production growth will be determined by the demand for these ultra-premium wines. If the project takes off, J-M has access to more grapes.

Here are notes on the current releases, which are sold in six-packs from orders@tscwine.com.

Similkameen Collective Roussanne 2013 ($35 for 70 cases). This is a rich and luscious wine that was fermented in a concrete egg. That seems to account for the palate-coating texture; that and the ripeness of the fruit. It has aromas and flavours of ripe apricot with a touch of warmth on the generous finish. “I don’t think eggs deserve to have all wines,” the winemaker says. “Some wines do not improve in the egg but the Roussanne is phenomenal.” 92.

Similkameen Collective Syrah & Viognier ($45 for 83 cases). The two varieties are co-fermented. The wine begins dramatically with aromas of plum jam exploding from the glass. On the palate, there are layered flavours of plum, black cherry, delicatessen meats and spices and white pepper. The long ripe tannins give the wine generous texture. 92. 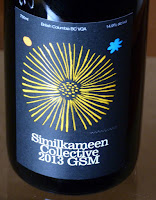 Similkameen Collective GSM 2013 ($50 for 104 cases). This is a blend of Grenache fermented on Syrah skins, with a dash of Mourvedre in the final blend. It was aged in neutral oak (the 2014 GSM is being aged in concrete). This wine manages to be bold and elegant at the same time. It begins with aromas of plum and blueberry and delivers a mouthful of ripe berry flavours supported by long, polished tannins. 93.

Similkameen Collective Consensus 2014 ($60 for 198 cases). This is a seamless Meritage blend, with aromas of cassis, blueberry and vanilla. It delivers spoons full of luscious red berry flavours to the palate. The finish is persistent with lingering bright fruit flavours. 95,

Posted by JohnSchreiner at Goodgrog at 3:50 PM