Arneis and its nearly lost friends 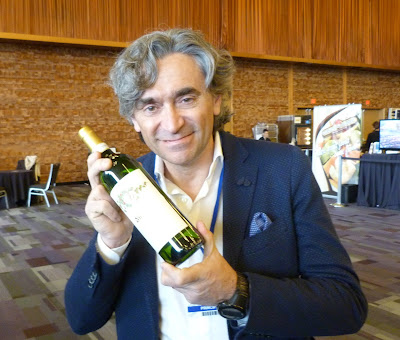 Arneis, a white grape varietal from Piedmont, is one of rising stars among Italian varietals now also being planted elsewhere.

Arneis wine is being produced not just in Italy but in Australia, New Zealand, California, Oregon and in British Columbia’s Okanagan Valley by Moon Curser Vineyards.

In the 1970s, the grape was almost extinct. This is a familiar story in Italy where hundreds of wine grapes are grown. For centuries, most ended up in local blends of red or white wine. Only in the past generation or two has there been a concerted effort to identify and make wines from the best wine grapes. Italy now has become one of the most dynamic and interesting wine country in the world.

This was celebrated at the recent Vancouver International Wine Festival with particular attention given to Italy’s indigenous varietals in three seminars led by Ian D’Agata, the author of an acclaimed 2014 600-page book, Native Wine Grapes of Italy.

“Italian wine is a fascinating subject but unfortunately, it is a very complicated one,” he said. “It is country where the government recognizes 461 grape varieties. They just admitted another 10 to the national registry, so that would be 471. In reality, I think there are at least 548 that are genetically distinct varieties. There are probably a lot more. Various professors estimate that are up to 1,000 wine grapes in Italy.”

This certainly sets Italy apart from other major wine-producing countries.

He has made it his mission to explain the native varieties of Italy. He believes it is easier to understand Italian wine by understanding the varietals than by getting to know the regions. In fact, neither approach is easy but it is important to make the effort. Any consumer who likes novelty will find it in the flavours and aromas of the many Italian varietals.

“You are all comfortable when you pick a Merlot because you know more or less what it is going to taste like,” Ian said. “I think the key for Italian wines is to get people to feel as comfortable with Vermentino or Pigato or Nasco.”

He noted that the study of native Italian grapes is comparatively recent. “Most of Italy’s native grapes have become subject to study just in the last 20 years,” he said. “Sangiovese, which is our most planted red grape, really only became a subject of scientific study in the 1960s, and of accurate study in 2000. You can’t say that this or that native vine is not a great grape because it has not been studied. Nobody knows anything about the best rootstocks, the ideal exposure, the best soils. It is all a matter of conjecture with about 95% of Italy’s grapes.  We are only learning about that now.”

Consumers now drinking Arneis, a subtly aromatic dry white with a hint of pear on the palate, owe a debt of gratitude to an Italian wine grower called Alfredo Currado. His son Luca, who runs Vietti, the family winery, related how his father saved the variety.

“In the 1960s, my father and my mother were looking to make a white wine, but they did not want to plant international varietals,” Luca said. “My father remembered there were many antique grape varieties planted in Roero [the region in which the winery is located].”
One of those was Arneis, of which about 4,000 vines remained, scattered among many growers. The challenge was to get grapes for a winemaking trial.

“My mother had an incredible idea,” Luca recalled. “A good friend of hers was the priest in one of the main villages in Roero. She said, ‘Why don’t we ask the priest if we could get the introduction to the farmers to get this grape?’ In Italy, the farmers are very suspicious. If you don’t get a good introduction, they can shoot you in your ass.”

It was months before they got a response from the priest. “Then in 1967, during the harvest time in September, during the Sunday Mass when all the farmers were in Church praying to have the best weather for the harvest, the priest started to talk about wine,” Luca recounted. “This priest was well known for his love of wine. The farmers looked at each other and they said, ‘Oh, he is worse than usual. He is already drunk at 10 o’clock in the morning.’ But the priest spoke of my family and their work in the Barolo region. Then he said, ‘Next Sunday, before you come to the church, you need to harvest the Nebbiolo Bianco [an old synonym for Arneis] and somebody will buy your grapes’.”

The following Sunday, when Alfredo Currado drove his tractor into the village square, there were 35 growers waiting for him. “Some had just one basket of Arneis or two buckets,” Luca said. “We have a picture at home of one farmer dressed to go to church, arriving with his bicycle and one case of Arneis on the front of the bicycle.”

The trial lot of dry white wine proved, after a winter on the lees, to be “fantastic,” Luca said.  “So my father planted his very first vineyard in 1968. Other growers took cuttings from this vineyard and planted more vineyards. The university selected a clone from this vineyard to make the modern clone of Arneis. From that started all of the modern Arneis.”

The story is entirely typical of how Italian varietals have been – and continue to be – rediscovered.

Vespaiolo is an ancient white grown just in the province of Vicenza, near Venice. It seems to have survived because growers banded together at a co-operative in 1950. Perhaps 300 acres are under cultivation.

Ribolla Gialla is another ancient grape grown in this corner of Italy, perhaps with similar acreage. The rising popularity of the variety today likely is due to the decision of one of Tuscany’s great wine families, the Frescobaldis, to invest in Fruili and make white wine.

Pecorino is another white varietal that found a sponsor in the 1980s. Ian D’Agata told the story this time: “In the Marche, a producer, Guido Cocci Grifoni, had heard of this old variety growing high in the mountains. He went to see it, liked what he saw, and decided to replant it in his own vineyards and this was in the late 1970s. That has how the first modern Pecorino wine was born.” There were 200 acres growing in 2000 but experts believe plantings have increased since.

Glera is a widely grown Italian white that was more commonly called Prosecco. It emerged from that shadow in 2009 when Italy decided to elevate Prosecco into a protected wine brand (like Champagne).

Obviously, Italian wines are perfect for those still stuck in the “anything but Chardonnay” rut. Of course, some Chardonnay also grows in Italy. Ian says, somewhat unfairly, that no one “in his right mind” would drink Italian Chardonnay.

Posted by JohnSchreiner at Goodgrog at 3:53 PM