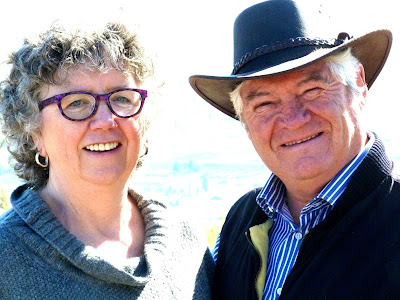 On March 1, Culmina Family Estate Winery will release its first single varietal red – a $31 Merlot from the fine 2013.
For those attending the Vancouver International Wine Festival, Culmina will have a table on the floor and this will be one of the wines.
For those at the trade tastings, Culmina proprietor Donald Triggs will also have another wine to be released on April 1: a $34  Cabernet Sauvignon 2013. Both wines are sold winery direct and the licensees; the Merlot is also in the VQA system.
The other wines at the Culmina table will be Decora (a Riesling), Dilemma (a Chardonnay) and Hypothesis, the winery’s flagship Bordeaux blend.
A portfolio extension by a winery as capable as Culmina should be exciting to all fans of and collectors of Okanagan wines.
The Triggs family has a meticulously cultivated vineyard on one of the best sites on the Golden Mile. The winery is state of the art. The winemaker is French-trained Pascal Madevon, who made almost a dozen vintages at Osoyoos Larose before joining the Triggs family at Culmina.
Here is a bit of background from John Schreiner’s Okanagan Wine Tour Guide.

The winery name is simply explained: it is the culmination of a career in wine for Donald and Elaine Triggs and their daughter, Sara. The parents spared no expense to create the south Okanagan’s most ambitious winery - at an age when others would retire. “Retirement to me is a nasty word because it implies stopping,” says Donald, who was born in Manitoba in 1944. “I don’t think life is about stopping. It is about continuing and doing what you love.”
He began his career in 1972 with the winery arm of John Labatt Ltd. He left that a decade later to run the North American operations of a British fertilizer company. But in 1989, when Labatt sold its wineries, Donald led the team buying them. This became Vincor which had grown to the world’s 14th largest wine company by the time Constellation Brands (the largest) took it over in 2006. A year later, he and Elaine bought what has become 22.6 hectares (56 acres) of densely planted vines on three mountainside benches on the Golden Mile.
They tapped the expertise of Alain Sutre, the same Bordeaux consultant they had worked with when Vincor (with a French partner) began the Osoyoos Larose vineyard and winery in 1999. Alain assured them they could produce wines of even greater quality because the Okanagan terroir is much better understood. With that assurance, the Triggs family has set out to raise the bar again, including luring winemaker Pascal Madevon to Culmina from Osoyoos Larose.
The three vineyard benches, each with differing soils and elevations, provide winemaking options. Merlot, Cabernet Franc and Cabernet Sauvignon comprise the largest blocks, followed by Chardonnay, Riesling, Syrah, Malbec and Petit Verdot. The surprise is the Okanagan’s first (one hectare) of Grüner Veltiner, the Austrian white, planted on the highest elevation vineyard in the south Okanagan.
There are other surprises here. The gravity-flow winery’s floor is a checkerboard of black and white Italian tiles under French chandeliers. The antique tasting room table came from the barn of Doukhabor leader Peter Verigin. The winery keeps visitor groups small but offers in-depth personal vineyard tours. There is no better place to view the Okanagan Valley than from Culmina vineyards, with a glass of wine in hand.

Here is my note on the new wine.

Culmina Merlot 2013 ($31). This wine was aged 16 months in French oak (50% new), polishing the long ripe tannins. The wine begins with aromas of red fruit, vanilla and spice. On the palate, the voluptuous texture emerges with breathing. The flavours include plum, cassis and blackberry. The finish lingers. 92

Posted by JohnSchreiner at Goodgrog at 9:57 AM