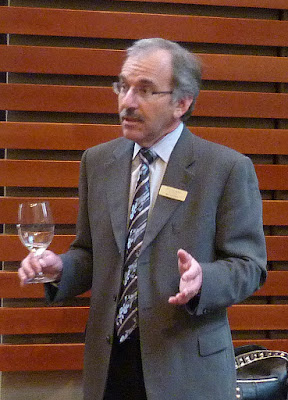 SpierHead Winery president Bill Knutson accompanied the winery’s latest release of three Pinot Noirs with his usual rmative note on what is happening in the SpierHead vineyard.

“The area is emerging, or perhaps has emerged, as one of the most suitable regions in for the production of Pinot Noir,” he wrote.

By coincidence, I recently learned that Quails’ Gate Estate Winery has just purchased about 100 acres of vineyard land in East Kelowna, to be planted during the next five or six years. About 40 acres will be planted with Pinot Noir.

That is confirmation from a leading Pinot Noir producer that Bill is correct.

“At SpierHead,” he writes, “our plan is to offer a portfolio of Pinot Noir bottlings; differentiating on the basis of specific vineyard origins and clonal content.”

“We recently planted five or six acres of Pinot Noir,” he wrote. “That includes a half acre each of two heritage clones: and Swan. When those plants begin producing, we’ll increase our options to create small, unique bottlings of Pinot Noir. SpierHead is never going to be a big volume producer, but I am hopeful that we can establish a niche as a high quality producer of Pinot Noir known for its site and clone specific bottlings.”

The SpierHead Pinot Noir that keeps the lights on its white label appellation Pinot Noir. In the 2014 vintage, the winery produced 900 cases, which is about 60% of the winery’s production.

“This is our fifth vintage of Pinot Noir and we are hoping to achieve a house style that is new world, but with some Burgundian restraint and finesse,” Bill writes. “We are not looking to have our Pinot Noir mistaken for a Californian wine. Rather, we are trying to produce a wine with the body and aromas that would be closer to an Oregon Pinot Noir in style.”

The trio of 2014 releases includes a vineyard-designated Pinot Noir: Gentleman Farmer Vineyard Saddle Block. Gentleman Farmer is the name of the vineyard where SpierHead planted its original four acres of Pinot Noir in a site contoured like a saddle.

Part of SpierHead’s strategy is to develop a small group of vineyard-designated Pinot Noirs. A second was made in 2014, but not yet released, from the Golden Retreat Vineyard in Summerland.

The third wine in this release package is the winery’s second vintage designated as Pinot Noir Cuvée, a selection of the best barrels in the cellar.

“We produce the Cuvée in small quantity with the goal of creating a wine that will be worthy of mention along side the top Pinot Noirs in B.C.,” Bill writes.

I would say SpierHead has succeeded in that objective.

Here are notes on the three wines.

SpierHead Pinot Noir 2014 ($23 for 900 cases). This is clones 115, 667 and Pommard, barrel-aged for 10 months in French oak. The wine begins with aromas of cherry and raspberry. There are bright and vibrant red fruit flavours on the palate, with a hint of oak. The texture is still firm, a signature of a youthful Pinot Noir that can be aged for several years. 88.

SpierHead Pinot Noir 2014 GFV Saddle Block ($27 for 211 cases). This is 34% clone 115, 33% clone 777 and 33% clone 828, also aged 10 months in French oak. This dark-hued wine has good concentration and weight. It begins with aromas of cherries. This is echoed on the palate, along with plum and mocha. Decanting fleshed out the texture; this is definitely a wine to cellar for several years. 91.

SpierHead Pinot Noir Cuvée 2014 ($32 for 274 cases). The winery also bottled 48 Magnums and 12 Double Magnums. This is 46% clone 115, 21% clone 777. 17% clone 828 and eight percent each of clone 667 and Pommard clone, aged 10 months in French oak. The wine’s rich colour is immediately inviting, as are the complex aromas of cherry, strawberry and raspberry that are echoed in the flavours. The wine is concentrated and the texture is seductive, as it should in a fine Pinot Noir. There is a lingering finish with notes of spice, red fruit and mocha. The wine will cellar for seven years; the large format bottle even longer. 92.
Posted by JohnSchreiner at Goodgrog at 3:26 PM

These are amongst my favorite BC pinots. http://bcwinetrends.com/2015/11/29/spierhead-winery-for-pinot/