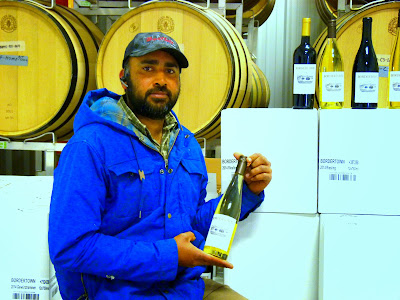 The number of wineries in Osoyoos increased to six with the opening of Bordertown Vineyards & Estate Winery in May.

Bordertown greets visitors to the town with a highway-side wine shop immediately north of the community. The tasting room, with an entrance framed by stone-sheathed pillars, is an attraction that will not fail to draw wine tourists.

Bordertown is the latest venture by an energetic agriculture entrepreneur named Mohan Gill.

It seems he has never stopped working. He bought his first orchard (with an older brother) in 1996. He took other opportunities to expand until he and his brother today operate 110 acres of orchards in the Okanagan.

To accelerate his business, he began delivering his own fruit to buyers in 1999 with his pickup truck. He turned over fruit delivery to another agency in 2007 but he still packs cherries, peaches and apples under his own brand. His customers include several major retailers.

Mohan dipped his toe into viticulture by planting two acres of grapes in 2005. A quick study, he was comfortable enough with grape growing that he expanded to 20 acres in 2007.

As he had done with tree fruits, he has continued to increase his vineyard holdings. He now grows 38 acres of grapes at two Osoyoos vineyards and another 50 acres in a Peachland vineyard. He has been selling grapes both to major Okanagan producers and to smaller producers, including Mark Simpson of B.C. Wine Studio. Mark was one of the people who encouraged Mohan to expand into winemaking. 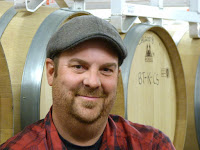 Encouragement also came from Jason Parkes (left), the winemaker at First Estate Winery in Peachland. Consequently, Mohan engaged Jason as his winemaker. In its debut vintage in 2013, Bordertown made close to 3,000 cases of wine. Two-thirds was sold in bulk while 147 cases of Syrah and 586 cases of a Merlot/Cabernet Franc blend are being offered under the Bordertown label.

Bordertown’s production jumped to 10,000 cases in 2014, quickly transforming Osoyoos’s newest winery into one of its largest as well. Mohan also continues to sell grapes to other producers.

“On this property I am growing five different varieties: Chardonnay, Riesling, , Gewürztraminer and Viognier and Pinot Gris,” Mohan says, referring to the vineyard near the winery. He also has Merlot, Cabernet Franc, Cabernet Sauvignon, Pinot Gris and a young block of Grüner Veltliner.

Jason should have no problem coming up with interesting wines from a selection like that.

Mohan already has his next expansion in mind. “I have an orchard and a winery business,” he says. “When I have free time, I will also launch cider. The cider business is going well, too.”

Bordertown Gewürztraminer 2014 ($18.99). Gold in hue, this is a rich and ripe wine with aromas and flavours of grapefruit. There is also the variety’s classic spicy aroma. The oily texture of the wine reminded me very much of an Alsace Gewürztraminer. 88.

Bordertown Pinot Blanc 2014 ($18.99). It is encouraging to see an excellent wine from a variety sometimes overlooked by consumers. The wine has aromas and flavours of apples. It is crisp and fresh on the palate with a dry finish and with good minerality. 90.

Bordertown Riesling 2014 ($18.99). This is a relatively light Riesling (alcohol of 11.15%) but it has a nice spine of minerals with aromas and flavours of lemon and lime that are still developing. The finish is dry. Cellar this wine for a year so that the flavours have a chance to emerge fully. 88.

Red 2013 ($24.99). This is a blend of 75% Cabernet Franc and 25% Merlot, aged in American oak. This blend shows the power of Osoyoos reds. It begins with aromas of plum and blackberry mingled with a note of oak. It delivers flavours of black cherry, black currant and vanilla, with a finish that lingers. 90.

Bordertown Syrah 2013 ($29.99). Again, the wine is bold and ripe. There are aromas and flavours of black cherries and plum mingled with black pepper and earthiness. 90.

Posted by JohnSchreiner at Goodgrog at 12:38 PM