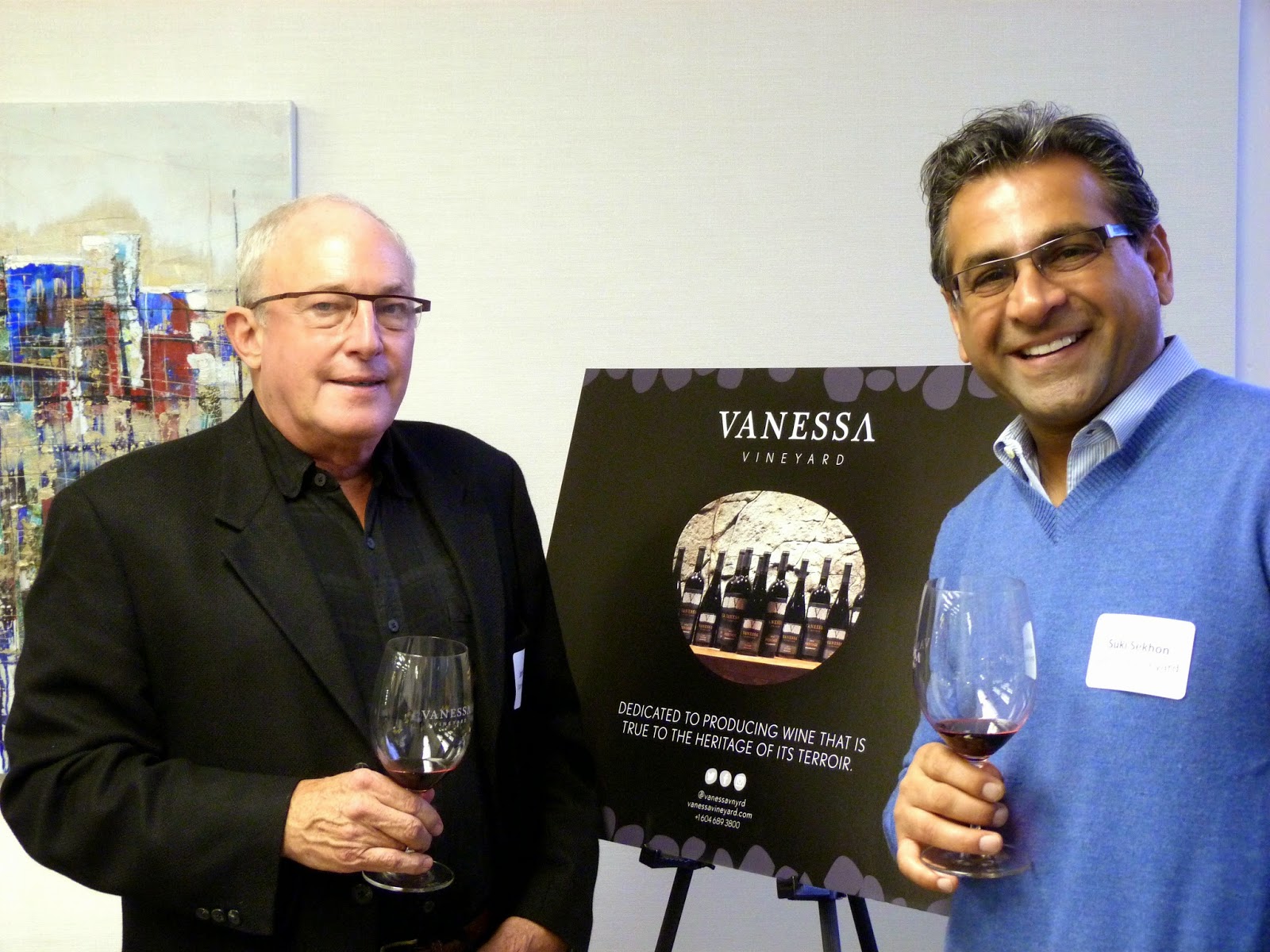 Two premium 2012 red wines, a Syrah and a Meritage, to be released this spring constitute a very strong start for Vanessa Vineyard, the newest winery in the .

Vanessa is owned by two businessmen: real estate developer Suki Sekhon and retired stock broker John Welson. The two were friends and partners in real estate projects before 2005, when they purchased property near Cawston for a vineyard and future winery.

“We kind of went into this initially, basically to build a vineyard, and then, as you get into it, the industry just pulls you along,” John told me the first time I interviewed him in 2006.

“John is the keener,” Suki told me at the time. “He has a real passion for wine. That is the love of his life.”

Suki was born in Vancouver in 1961, the son of immigrants from . “We’re farmers from ,” Suki says. “Our history and our background go back hundreds of years in the farming community.”

He studied urban land economics at the , followed by a marketing and real estate diploma in 1984 from the British Columbia Institute of Technology. Since 1999, he has been chief executive of CRS Group, a major developer, owner and manager of real estate projects.

When he started looking for vineyard property in the Okanagan and the Similkameen, he thought he could use the same business model that works in his development projects. The vineyard would be developed and leased to a major winery. Then he discovered that the large wineries – there are few really large producers in the Okanagan – were not prepared to commit until they knew what quality of grapes would come from the vineyard.

So he and John plunged ahead independently, purchasing a large block of raw land on a hillside above Highway 3, south of Cawston. It is almost diagonally across the highway from the Seven Stones Winery.

The soil, however, is different. Richard Cleave and Robert Goltz, who were hired to plant about 75 acres of grapes, had to bring in a rock crusher to pulverise the rocks. The rocks were so hard that the crusher wore out its first set of teeth. Planting in 2006 ran late; a portion of the vineyard died in the summer heat and had to be replanted.

Suki and John decided to plant just red varieties on the sun-bathed slope. “I must have had six or seven phone calls from people, asking me if I was crazy; was I sure what I was doing?” Suki says. He figured that if he needs white wines in his portfolio, he will find a cooler site. As it happens, Richard and Robert did plant two acres of Viognier, a heat-loving white that is useful for co-fermenting with Syrah.

The major blocks, up to 20 acres each, are Syrah, Merlot, Cabernet Franc and Cabernet Sauvignon. Andrew Peller Ltd., owner of the nearby Rocky Ridge Vineyard, began buying Vanessa’s grapes about five years ago when the vines began producing.

“They have been great partners, customers and terrific people to deal with,” Suki says. That might be a bit of an understatement. Peller also owns Sandhill Winery and the winemaker there is , a 35-year veteran of the industry and a superstar in his own right. He has been allowed to make Vanessa’s debut vintages.

He also knows the vineyard well. He has also made several vintages of a Cabernet Merlot for Sandhill from Vanessa Vineyard grapes.

“We’ll have to make a decision long term on production levels and on a winemaker,” says Suki, who is in the process of licensing a production facility on the Vanessa property.

So far, there are no plans for a tasting room in the immediate future. However, an ideal location at the top of the vineyard has been set aside for such a possibility down the road.

“They put a lookout at the top for me,” Suki told me as the vineyard was being planted. “It looks out at the whole . It is a phenomenal view. You can look 180 degrees over the whole valley.”

In the early history of settlement in the valley, there apparently was a stagecoach stop near the vineyard.  John recounts walking the property and asking Richard Cleave about its history.

“And Richard pulled out the old maps and right through the middle of the vineyard is a very old easement for the original stagecoach road that went from to Osoyoos,” John says.

For a time, the partners considered calling the winery or . In the end, they opted for Vanessa, the name of Suki’s charming eldest daughter. I’d say it’s a good call.

Vanessa Vineyard Meritage 2012 ($36 for 440 cases). This is 50% Cabernet Sauvignon, 27% Merlot and 23% Cabernet Franc. Each varietal was aged six months in barrel individually. Then the blend was assembled and aged another 12 months in French and American oak. Aromas of black cherry, vanilla and cassis explode from the glass. On the generously-textured palate, there is a core of sweet fruit – black currant, blackberry, fig – with notes of cedar and spice on the finish. The ripe, silky tannins give this wine a full body. 92.

Vanessa Vineyard Syrah 2012 ($39 for 186 cases). The Syrah grapes were co-fermented with six per cent Viognier. The wine was aged 18 months in French and American oak barrels (this was an eight-barrel wine and five of the barrels were new). This is a big, plush Syrah with black cherry and vanilla aromas that are echoed in the flavour, along with a touch of white pepper and chocolate. 91.

Posted by JohnSchreiner at Goodgrog at 4:33 PM