Amarone from the Okanagan

A rare Appassimento red wine – in effect, an Amarone style wine – has been introduced in the Okanagan by Intersection Estate Winery.

In the classic Amarone style, Intersection winemaker Dylan Roche air dried newly harvested Merlot grapes for 40 days for the inaugural 2012 vintage (25 cases). That partial dehydration concentrated the flavours and the sugars, resulting in a finished wine with 17% alcohol and rich, mouth-filling flavours.

About 70 cases of 2013 Appassimento are maturing in barrel for release in a year or two.

Wines like this are seldom made in the Okanagan. To the best of my recollection, only Pentâge Winery and Castoro de Oro Estate Winery have made wines from air dried grapes.

The innovative Appassimento is among the impressive wines that have just been released by Intersection. The winery, which opened in 2011, is so named because of its location at the intersection of Highway 97 and Road 8, a short drive south of Oliver. 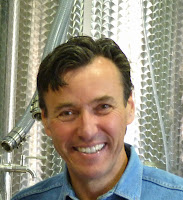 Proprietor Bruce Schmidt is a Kelowna-born venture capital entrepreneur who is also a veteran of the wine industry. He started his career in the late 1970s as a marketing executive with Calona Wines, famously turning the Schloss Laderheim brand for several years into ’s largest selling white (a million cases a year).

While he left Calona in the early 1980s for careers in advertising, biotechnology and venture capital, he almost always kept involved with the wine industry. In 2007 he bought vineyard property with a vacant packing house. The vineyard is planted mostly with Merlot while the packing house has been turned into a very serviceable winery.

The initial wines were made by a consultant until Bruce was able to recruit Dylan in March 2012. Born in in 1976, Dylan immersed himself in wines and winemaking while living in and working for the bicycle tour company, Butterfield & Robinson, starting in 2000.

He earned a diploma in Viticulture and Oenology in 2004 from the Faculté d'Oenologie de in . Until returning to , he made wine at three chateaux, as well at several properties in and in .

“I lived five years in and is only about 3½ hours away,” Dylan says. “I would go down on weekends and ride my bicycle and taste. We would taste lots of things in Valpolicella, including Amarone. I thought the Okanagan would be a great and easy place to make Amarone because of the dry climate.” In fact, he even elaborated the idea in his thesis at the wine school.

Soon after joining Intersection, he persuaded Bruce that the winery should make an Appassimento. “We set aside some Merlot from the south block and we picked it straight onto mesh drying racks. The grapes spent 40 days - whole bunches drying on racks indoors, as you would in Valpolicella. It was destemmed, fermented on skins in upturned barrels with heads off. It went into barrels around December 20, 2012, and was pressed off in early February.” The wine then was aged 18 months in French oak. 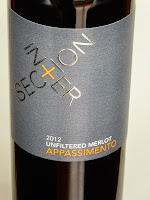 Intersection Appassimento 2012, not yet priced, is likely to be allocated through Intersection’s tasting room and to the winery’s wine club. It is a stunning wine which I have scored 94 points. It has richly concentrated flavours of plums and prunes, with notes of liquorice on the long finish. The alcohol is 17.2% but the wine is so full and viscous that it just does not seem hot.

I once drank a fine Amarone in with a big wedge of parmigiano reggiano. That would be a great pairing with this wine as well.

Here are notes on other wines from Intersection.

Intersection Mile’s Edge White 2012 ($18.90). This intriguing blend is 75% Sauvignon Blanc, 25% Viognier. The wine begins with aromas of honeyed pineapple, leading to flavours of pineapple and apricot. The finish lingers. 90.

Intersection Riesling 2013 (about $17-$18). This is from the first harvest from a young block of Riesling in the Intersection vineyard. The wine has herbal and lemon flavours, fairly soft acidity and a crisp, dry finish. Like most Rieslings, it needs to age a bit in the bottle. 88.

Intersection Barrel Ferment Viognier-Marsanne 2012  ($24.90). The wine again has honeyed aromas and flavours of apricot and citrus, with tropical fruit flavours on a very long finish. 91. 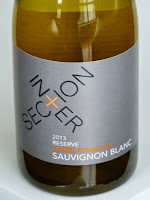 Intersection Rosé 2013 ($17.90). This is a Merlot rosé with a dash of Cabernet Franc to enhance the lovely rose petal hue. It is a dry French style rosé, with a hint of strawberry in the aroma and flavour. 88.

Intersection Milepost Red 2011 ($18.90). Made entirely with Merlot, this is a quaffable fruit-forward red, with flavours of cherry and black currant. Aged in barrels – but not new oak – the wine has long, polished tannins. 88.

Intersection Unfiltered Merlot 2011 ($21.90). Here is a Merlot with depth and concentration whose flavours are just beginning to open. There are tastes of black currant and mulberry with a hint of chocolate and coffee on the finish. The long ripe tannins were burnished by aging the wine 12 months in French and American oak. 90.

Intersection Unfiltered Cabernet Franc 2012 ($24.90). This is a big, brambly red, beginning with floral and raspberry aromas. On the palate, there are flavours blackberry, raspberry and plum. There is appealing spiciness on thje long finish. 92. 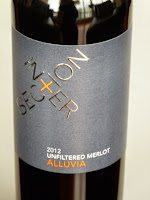 Intersection Alluvia 2012 (not released). This unfiltered Merlot is from a specific block in the northwest corner of the vineyard with complex alluvial soil. The wine is big (14.8% alcohol) and concentrated, with flavours of plum and black currant. On the finish, there is cola and chocolate framed with toasty oak. 92.

Intersection Silica 2012 (not released). Also an unfiltered Merlot, this is from a sandy block in the vineyard. The wine has appealing aromas of plum and cassis with plum and black currant flavours. The texture is leaner and the tannins are a bit more aggressive than Alluvia. 91.

The vineyard blocks are practically adjoining. “You can actually walk from one zone to another,” Bruce says. “It is the same vineyard. The irrigation line segments the blocks. What is ironic is that we always felt this northwest block wasn’t very good. Yet the Alluvia turned out to be brilliant.”

Bruce continues: “There has been a lot of talk lately about appellations and terroir. This icates that we feel the same way. We should be talking more about our micro-terroirs. And that just doesn’t mean soil. In this case, we split and irrigation system. We will supplement the soil differently – yet the blocks are butting up against each other. It also plays in a little bit into the idea of the French small property.”

Posted by JohnSchreiner at Goodgrog at 4:36 PM