Foxtrot tweaks some of its labels Two of the three new wines from Foxtrot Vineyard have slight but important changes to the labels. There are a couple of stories here.

First, there are no label changes to the centerpiece of the Foxtrot range, the Pinot Noir from the 17-year-old 115 clone vines in the estate vineyard on the Naramata Bench. The 3.5-acre vineyard produces enough fruit for about 500 cases annually of a superlative Pinot Noir. 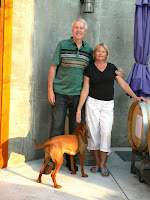 For those who complain that there is never enough to meet the demand, Foxtrot’s owners – Torsten and Kicki Allander and their son, Gustav – extended the planting last year. With cuttings from the original vineyard, they planted 2,700 additional direct-rooted vines. And there is room for at least that many more vines in the future.

Meanwhile, Foxtrot has begun to make selective purchases of grapes from other vineyards, primarily Naramata Bench vineyards. Keep an eye peeled for a 2013 Pinot Noir rosé from one of the newest producers added to the Foxtrot stable, but under the Wapiti label.

The first vintage of Foxtrot Pinot Noir was made in 2004. It was not too long before sommeliers began pressing the Allanders to add a premium Chardonnay to the portfolio. They began doing that in the 2008 vintage.

For several vintages through at least 2010, the Chardonnay label gave credit to the Coolshanagh Vineyard. This is a property northeast of Naramata owned by a businessman named Skip Stothert. (He owns Green Roads Recycling Ltd., an innovative paving company.)

The  Coolshanagh Vineyard does not appear on the 2012 Foxtrot Chardonnay because Stothert, a great Chardonnay fan, has decided to have the grapes reserved for his own label. He arranged to have Okanagan Crush Pad produce the wine instead.

There are no plans announced yet for the release of the wine. In a recent email, Stothert told me he is not planning a public tasting room on his property. “I have a wine building and will apply for a license but will continue with OCP well into the future,” he said. “Those are our plans at this point. We feel we have the best of both worlds. A full fledged winery obligation would definitely cut into my skiing, , other planned trips.”

His plans to produce for his own wine caused Foxtrot to look for other well-grown grapes. The 2012 Chardonnay comes from 16-year-old vines in a vineyard not far from Foxtrot. It is not named on the label, however.

It is the same vineyard under new ownership.

Foxtrot has been buying the Erickson grapes for several vintages while Arne Ericson, the owner, was trying to sell the vineyard at a price that did not fit into the budgets of the Allander family.

The Ericson is such a good wine that ’s toney Hawksworth restaurant had it on its list. One evening, Torsten was dining with Peter Henricsson, a wine collector friend as well as a fellow Swede. When Peter expressed admiration for the wine, Torsten warned that Foxtrot expected to stop making the wine after the vineyard was sold.

A week later, Peter – a businessman who has been very successful in high technology - bought the vineyard and asked the Allanders to farm it for him. In return, Foxtrot has put his name on the label.

Whatever vineyard is on the labels, these are three impressive wines.

Foxtrot Chardonnay 2012 ($46.15 for 390 cases). This wine, to be released in March, begins with appealing aromas of citrus with an underlying hint of butter and oak. The wine delivers flavours of tangerine and guava, with a crisp and vibrant finish. The classic Burgundian structure suggests this wine, while good now, has plenty of upside with several years in the cellar. 90.

Foxtrot Pinot Noir 2011 Henricsson Vineyard ($46.15). Don’t be misled by the light ruby colour. The wine was only bottled in October and is developing its silken elegance and body in bottle. The wine begins with aromas of cherry and spice which are echoed on the palate. 91.

Foxtrot Pinot Noir 2011 ($56.40). This wine is simply totally indulgent, beginning with aromas of strawberries, a melange of red fruits and spice. On the palate, it delivers a medley of fruits from strawberry to plum, with spice notes on the finish. The texture is silky while the acidity is fresh enough to give the wine longevity. The winery suggests it will age for 15 or more years. 93-95.
Posted by JohnSchreiner at Goodgrog at 11:37 AM