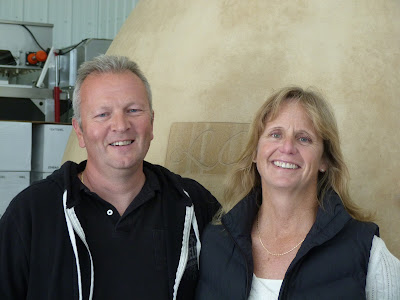 
This new Osoyoos winery, which is just releasing its first wine – a 2012 Viognier – is the Okanagan’s southernmost winery. The property is snug against the Canada-U.S. border. Visitors to the winery actually turn left from Highway 97 just before they get tangled in the immigration line-up. They wind around the massive customs buildings to find the winery on . From the door of the winery, you could pitch a baseball across .


The winery is named for Larry and Anna Franklin, the parents of Carol Scott, who owns this winery with her husband, Dan. Larry Franklin was a major shareholder in Shannon Pacific Vineyards, a large vineyard until it was broken up after the 1988 vine pull out. During one vintage, Carol was assigned to keep the starlings away from the grapes with a bird gun. In another vintage, she helped pick grapes. She also hauled grapes to the family home in where her father made wine.


When the vineyard was broken up, Larry Franklin offered his 25 acres to his family. But they were all busy raising families and making a living in other careers and the vineyard went to other buyers. “We should have bought it,” Carol says wistfully.


Her Shannon Pacific experiences planted the seed for Lariana Cellars even as the Scotts, both born in 1963, pursued careers in . Don is a millwright while Carol has been a travel agent. They moved to Osoyoos in 1989, taking over a campground that her parents had established in 1968. The camp sites, which they still operate, takes up the lakeside half of the four-hectare (10-acre) property. The vineyard, where they began to replace apple and cherry trees with grapes in 2007, occupies the top half.


Planting vines was Carol’s passion. “It took a few years to get Dan on board,” she admits. “It was kind of a dream to plant grapes. I finally convinced Dan and we cleared the land. It was a new tractor that convinced him.” They planted Viognier, Cabernet Sauvignon and Syrah. When the hard winters of 2008 and 2009 mortally damaged the Syrah, that variety was replaced with 2,500 Carmenère vines. Now, they purchase Syrah for Lariana’s red blend.


The Scotts, who intend to limit production to about 1,200 cases a year, built a plain Jane winery. They invested instead in top flight equipment, including the California-made concrete egg in which Carol and consulting winemaker Senka Tennant make Lariana’s Viognier.  Stainless steel is half the price but whites made in concrete eggs – several larger Okanagan wineries have them – show richer texture.


Senka Tennant is one of the founders of Black Hills Winery, where she produced ’s first red from Carmenère, a variety made famous by . She is currently a co-owner of Terravista Cellars on the Naramata Bench. Recruiting her as consulting winemaker was the suggestion of Dick Cleave, the veteran vineyard manager who once managed Shannon Pacific.


“She has been huge for us,” says Carol. Even though she and Don have taken courses in winemaking, they recognized the need for experienced guidance in launching Lariana. Senka Tennant is certainly a winemaking superstar. “We are very lucky that she said yes.”


Here is a note on the stunningly good debut release.


Lariana Cellars Viognier 2012 ($23). The exuberant wine announces itself with dramatic aromas of guava, mango and peach and then delivers these rich and complex tropical fruit flavours. The bright acidity adds a refreshing touch of lime to a finish that just does not want to quit. I have seldom encountered a wine that delivers the flavours of the grapes so accurately. Fermentation in the egg, where there is a gentle mixing of the lees, has added a rich and satisfying texture. 95

Posted by JohnSchreiner at Goodgrog at 9:10 AM

Do you know where this wine can be obtained in the Vancouver area? Their website doesn't exist yet, so I don't know that they do online orders and ship.

One Vancouver store is considering ordering but I am not sure that has happened. The winery only has 200 cases and I am told their phone is ringing off the hook. You might also want to call Lariana.