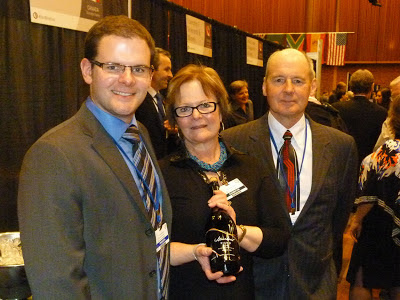 
The newest sparkling wine in British Columbia is Piano Brut from Stoneboat Vineyards. The winery poured the $22.90 wine, its first sparkler, during the recent Vancouver International Wine Festival.

There are interesting back stories to this wine. It was created with the help of a federal grant that enabled the winery to acquire the skill and the technology of the Charmat method.

I was a bit surprised when I read that Stoneboat had received a grant to create its new sparkling wine with a technology that is more than a century old. The explanation is that no Okanagan winery has used the Charmat method in a generation. The team at Stoneboat had to learn all over again how it works and what equipment is needed.

“We have been looking at this for about four years,” says Lanny Martiniuk, the long-time Oliver grape grower whose family opened Stoneboat in 2007.

Lanny’s decision to add a sparkling wine to the Stoneboat portfolio was accelerated last year when a winery that has purchased his grapes for years warned it might not need them any longer. There is a rising surplus of grapes in the Okanagan.

“Maybe we should look at more ways of utilizing our grapes,” Lanny concluded.

The Charmat method is named for a French scientist, Eugène Charmat, who in 1907 perfected a method of fermenting wines in bulk that actually had been invented in Italy. He was an enologist at the University of Montpellier, which is still a major wine school.

The process is sometimes also called the Martinotti method, named for Federico Martinotti, who was a director of an experimental wine institute in Asti. Here in the late 19th Century, he worked on the fermentation of sparkling wine in a tank; this is the method that was perfected by Charmat.

Today, it is used in the production of Prosecco and other moderately priced sparkling wines.

It is, in fact, one of four methods of getting bubbles into wine. The cheapest is by putting wine in tanks, pressuring the tanks with carbon dioxide and then bottling without loss of pressure. The disadvantage is that the bubbles are not very long lasting in the glass.

Two methods require fermentation in bottle. The méthode champenoise is used in Champagne and everywhere else for premium sparkling wine. The wines, with fine and long lasting bubbles, are sold in the same bottles in which the secondary ferment takes place. There is the transfer method in which the wines are fermented in bottles that are then emptied, under pressure, into tanks for racking and blending, before being transferred, still under pressure, into new bottles.

The Charmat method strikes a happy medium between the complexity of bottle fermentation and the simplicity of carbonating.

It is ironic that Stoneboat had to relearn a process that once was licensed to a Canadian winery. In 1928, Canadian Wineries of Niagara Falls, a predecessor to Chateau-Gai Wines, got a 25-year license to use the Charmat method in North America.

Chateau-Gai was so pleased with its “Canadian Champagne” that, in 1955, it arranged for a store window display of the product in Paris and then milked the publicity back in Canada. The headline on an article in the Globe & Mail Magazine was: “He Sells Ontario’s Wines in the very heart of France.” Champagne producers were outraged and litigated for the next quarter century to stop Canadians from using Champagne on the labels of their sparkling wines, especially those made by the Charmat method.

In the 1970s, Chateau-Gai was acquired by Labatts, along with Casabello Wines in Penticton. If my memory serves, Casabello had Charmat tanks. Both Chateau-Gai and Casabello were acquired by what became known as Vincor, which closed the wineries and likely scrapped the Charmat tanks. The sparkling wines made by Sumac Ridge and by Jackson-Triggs employ the traditional Champagne method.

Stoneboat calls its wine Piano Brut, no doubt inspired by the grand piano in the winery’s tasting room. Several members of the family are good musicians.

To produce the wine, Stoneboat had to import two 5,000-litre pressure tanks from Italy. Two are needed so that the wine, when it has finished fermenting, can be racked to the other tank while remaining under pressure. The capacity of the tanks limits the production to about 500 cases of wine in each production cycle. Stoneboat also plans to produce a sparkling rosé this summer.

Piano Brut is built around Pinot Blanc and Müller-Thurgau, a very good blend that yields a slightly aromatic wine with flavours of citrus and apple and with a crisp, tangy finish. The Charmat process captures fresh, fruity flavours and minimizes yeast notes commonly associated with bottle-fermented bubbly.


Posted by JohnSchreiner at Goodgrog at 1:51 PM