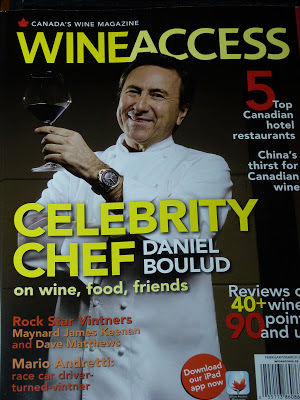 RedPoint Media Group of announced that Wine Access magazine was being shut down immediately. The announcement likely also kills the Canadian Wine Awards and the International Wine Value Awards.

Wine Access magazine was established in in the 1990s by Lawrason. Somewhere in its early history, it was taken over by Warwick Publishing of Toronto.

From firsthand experience, I know that was one of ’s most inept publishers because they published my 2001 book, Icewine: The Complete Story. The agent who steered me to said I would benefit from the synergy of being published by a firm who owned a national wine magazine.

As if. Wine Access never published a single house ad for my book. Now did do much else to sell the book, finally sending part of the print run to a distributor where the books actually disappeared.

In 2004 RedPoint bought Wine Access and brought considerably more resources and editorial expertise to the magazine, as well as adding complementary publications and services. That included the Canadian Wine Awards, one of the most credible and ably judged of Canadian wine competitions. If no one picks it up, it will be a major loss to the Canadian wine scene.

In 2006, Wine Access also began publishing The Canadian Wine Annual. Lawrason, then the editor, wrote that “we were inspired … by a similar publication in .” There were about 250 wineries in the 2006 CWA. Last year’s issue included about 550 wineries.

As dynamic as the Canadian wine industry had been, it appears the CWA, which was available on newsds and in wineries, was not being purchased as briskly as one would have expected. And when a version for the Ipad was also published last year, Wine Access sold only 34 copies.

The 2013 CWA was going to appear as Canadian Wine Traveller. Wine Access thought that by adding travel articles but reducing text on wines, the product would sell better. We will never know (I doubt it) because this has also been scrubbed.

Why did Wine Access fail? RedPoint is no . It has other successful publications, including Westjet’s inflight magazine. What Wine Access needed, apart from perhaps a sharper editorial focus, was far better distribution, such as a partnership with a national newspaper.

We are left with two national wine magazines. Vines Magazine is part of Sun Media. Tidings was launched about 25 years ago by the Opimian Society, which now has 20,000 members, a healthy readership base. A subscription comes with membership.

There also are regional magazines covering wine and food, such as Savour in , Eat Magazine in , Northwest Palate in and Wine Press Northwest in .

The challenge that Wine Access was always going to have was to appeal with a national magazine to wine and foodies who eat and drink regionally. I have found that with my books. The two dealing with all the Canadian wineries have flopped while those dealing with just have succeeded. Readers in one region could care less about the wines from other regions that they cannot get anyway.

Wine Access’s coverage of the food and wine scene probably was too broad. The final edition now on the newsd had a cover article on chef Daniel Boulud. There are also articles on vintner Mario Andretti, Canadian wine sales to and , a profile of an winemaker, and a big advertising feature for the wines of , the theme at this month’s Vancouver International Wine Festival.

The focus may have been a bit fuzzy. I have not seen an Andretti wine in this market in a decade (and I follow Formula One racing) and I have never seen an wine. Why would I want to read about them? Well, I might from professional interest but why would you?

I would love to see the books, however. The magazine has always had a lot of advertising. Unless production and distribution costs were excessive, I have trouble underding why there was not the revenue to sustain the magazine.

This news release from the All Canadian Wine Championships has some relevance to the above blog post.

Posted by JohnSchreiner at Goodgrog at 3:59 PM

Sad news about the demise of Wine Access. I will really miss the Canadaian Wine Annual. Thank goodness for Eat Magazine and Taste, The BC Liquor Stores magazine. Both have fabulous articles, recipes, are free and inspire me to try new wines.

John, Northwest Palate stopped printing just last summer, so it too has gone away.

Sorry to hear you haven't tried any of the Arizona wines. Maynard's are listed in Alberta and BC, as are the Andretti wines from Cali, and they're very good offerings, and Maynard is one of the world's most successful musicians these days. Thanks for all of your hard work for Wine Access over the years.

I am sad to see this publication fall to the way side. The wine annual has always been a staple for me when I drive from Calgary to the Okanagan. I am now very thankful to have this blog for my Canadian wine information. PS The Arizona Stronghold wines are good, not great, and does not reflect the hefty price. PPS I did however find and purchase your Icewine book at a second hand furniture store in Calgary, I will have you sign that one some day as well.
Keep up the good work John