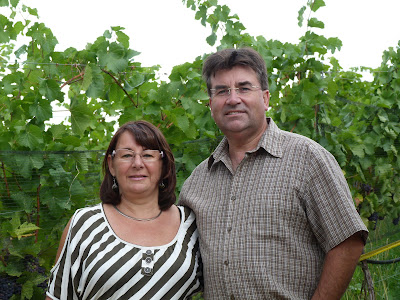 Strictly speaking, Saxon Estate Winery is not new; it is a winery under a new name and under different management.

Located in the bucolic countryside behind Summerland, this winery opened in 2007 as Hollywood &; Wine. It was so named because one of the founders, Neil Massey, spent many years driving equipment trucks for companies shooting movies in .

Last year, Neil and his wife, Betty, both in their 70s, decided they had had enough of the onerous work of vineyard and winery management. They sold the winery to a younger couple from .

I consider it new for 2012 because Paul and Jayne Graydon, the new owners, have totally rebranded the winery. They also hired Danny Hattingh, a young South African winemaker, to polish the wines, including wines they had purchased from other producers to raise the winery’s volume.

Danny did a pretty capable job, as the reviews below would indicate. However, I anticipate another jump in quality with Saxon’s 2012 vintage, over which Danny had total control.

There are no prices on the winery’s web site. However, each wine is not only described graphically but with a useful sound bite. This is a clever feature and I am not aware of any other winery that has picked up on the idea yet.

Here are my notes on the wine. You can compare them with Saxon’s sound bites.

Saxon Pinot Gris 2011. A wine with a slight blush, this has aromas of pear and flavours of pear and citrus, with good weight on the palate. It is well balanced, juicy yet dry on the finish. 89.

Saxon Viognier 2011. This is a light and lean white with aromas and flavours of citrus; a bit short on the finish. 87.

Saxon Gewürztraminer 2011. Here is a fine Alsace-style wine with aromas and flavours of spice and grape fruit. Full on the palate, it finishes dry and the flavours linger. 88.

Saxon Léon Millot Rosé 2011. Here is a rosé with a vibrant hue, thanks to the red flesh of the grape. It has aromas and flavours of plums and cherries. The juicy texture gives this wine good weight. The finish is crisp. 90.

Saxon Pinot Noir 2009. The shortcomings of this wine – it is over-extracted – can be laid to the previous management. This wine is still firm, with aromas of cherries and plums. 86.

Saxon Merlot 2011. The winery decided to make an unoaked Merlot, succeeding with a juicy quaffer that has aromas of cherries and ripe plums, with plum flavours and a chewy texture. 88.

Saxon Léon Millot 2011. Dark in colour, this begins with aromas of chocolate, plum and blackberry, followed with flavours of plum and mocha. The tannins are silky and the finish is long. 89.

Saxon Cranky Old Man 2011. This has to be one of the better names for a man, again attributable to the previous management and returned by the current owners. Any number of their customers walk away with bottles as gifts, perhaps to make a point. This is an unconventional blend of 70% Pinot Noir, 30% Merlot. (It’s enough to make a Pinot Noir fancier cranky!) There are aromas of plum and liquorice, leading to flavours of raspberry and cherry. The winery’s back label notes, which generally are very accurate, describe this wine as having silky tannins. I find the tannins firm enough that I would age this wine another year. 88.

Here is the winery profile from the recent edition of John Schreiner’s Okanagan Wine Tour Guide.

Paul Graydon liked what he found when changing careers in 2011 to buy, with Jayne, his wife, Hollywood & Wine Winery in Summerland. “I come from this dog eat dog software industry,” he says. “It is refreshing to come to the wine industry where watching your back is not the first issue. It sounds like there is room for everybody to play.”

Born in in 1960, Paul pursued a high-flying sales career, first with Xerox Corp., then as vice president with a software company called Emtex and with Pitney Bowes, which bought Emtex in 2006. That was three years after he had moved from to to accelerate the Emtex business in . In the summer of 2010, he and Pitney Bowes parted company and he decided he had had enough of that life.

“I said to Jayne that I could go back into the software industry and earn the big dollars,” he says. “But I was fed up with looking at airport ceilings and travelling all over the and .  I wanted something that we can both do together, without having to report to our boss every day.” So they set up a wine agency called Great Wines of the World. “We had always been wine people,” Paul says. “I had been drinking the best wines in the world, having travelled all over Europe and the on expenses.” Jayne had also spent several years selling in . When they began looking for Okanagan wines to supplement their agency’s European wine portfolio, they concluded that owning a winery better suited their career objectives.

Hollywood & Wine, one of several wineries they looked at, is an attractive rural property established by Betty and Neil Massey. They had moved there in 1998, planting about four hectares (10 acres) of vines for their winery that got its name because Neil was a trucker for movie production companies.  Both in their 70s and only selling about 1,000 cases a year, they were ready to retire when Paul and Jayne came along. The Graydons, given their commercial experience, are targeting annual sales of 3,000 to 4,000 cases for Saxon Winery, named for the historic Anglo-Saxon region of they come from.

We recently visited Saxon Estate Winery last week and was very impressed. We knew Betty and Neil from Hollywood and Wine well and loved their wines especially the Geurwertzminer. I have to say that Paul has really maintained and even stepped up to the plate with his selection of wines this year. I was very impressed with the viogner and the Geurwertminer. Even the Reds were quite good. Paul was in the tasting room and showed us a great time. He is very pleasant and appeared to be very knowledgable regarding his wines. We will definitely be returning frequently to this little winery.