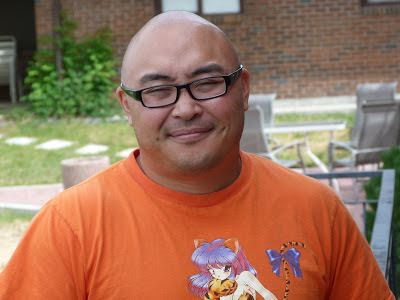 Richard Kanazawa’s ambition to have wines under his own label, which actually resulted in his departure from two previous employers, has finally been realized with the release of four wines this fall.

The wines have been made available in a few wine shops and restaurants, including Libations wine store in . Except for the white table wine, production is small.

The wines are certainly worth seeking out, not only for their intrinsic quality but for the refreshing beauty of the package. The elegant labels and capsules were designed by Richard’s wife and partner, Jennifer. The signature design element on each label is what the Japanese call a diamond flower. It has special meaning to Richard because his mother had a diamond flower on her kimono.

Richard was born in . His first job in the wine industry was delivering wines for Domaine de Chaberton winery. He had studied food technology at the British Columbia Institute of Technology but could did not land a job in a winery cellar. So he headed to in 2002 where accepted his BCIT credits. He combined his studies with winery jobs, including with the Simon Gilbert Winery.

He returned to in 2004 and was hired by Red Rooster Winery on . He moved to a few years later but not before making a Malbec at Red Rooster that won a Lieutenant Governor’s Award of Excellence.

He did four or five vintages at until moving on in 2011 to take over at Lang Vineyards, which was just emerging from bankruptcy. He cleaned up the cellar, reinstalled winemaking equipment, resuscitated the wines and made the 2011 vintage. Then early in 2012, the owner reneged on a prior understanding and decided he would not tolerate Richard making wines as well for the label.

Richard has since moved to Bench 1775 Winery, where the owners are in full agreement with him making both their wines and his own wines.

One can perhaps understand that a winery owner might feel possessive of his winemaker’s talents. However, winemakers of integrity do not favour their own projects over those of their prime employers but set out to make all the wines competently.

A recent announcement by Mike Lang, who succeeded Richard as general manager at Lang Vineyards, speaks volumes about Richard’s integrity in making the wines at Lang.  Mike Lang, by the way, is the nephew of Lang Vineyards founder Günther Lang; neither was involved in issues around Richard’s employment.

“As many of you know this past weekend marked the start of the Okanagan Wine Festival,” Mike Lang said in a news release recently. “Each year this festival is started with the Okanagan Wine Awards. It is an event where the best wine from the Okanagan is submitted for judging by some of 's leading wine experts. The event took place on Thursday September 27th.

“Lang Vineyards had entered a few wines into the judging event which we felt were our top wines and were extremely happy with the feedback we received for them at the Awards Ceremony. Lang Vineyards received a Gold for our
2008 Farm Reserve Riesling and Bronze for the 2011 Maréchal Foch.

“While we thought this news was great we were blown away when we received the announcement that our 2008 Farm Reserve Riesling had also won Best White Wine. It is an incredible honour to receive these awards and we are truly ecstatic!

“To top off that great news from the Okanagan Wine Awards, Lang also received news earlier in the day that we had won a Silver for our 2011 Farm Reserve Riesling and Bronze for our 2011 Bravo White Blend. Both these awards were from the Canadian Wine Access Awards.”

Clearly, Richard did a fine job in the Lang cellar.

And he did a fine job for his own label. Here are notes on the releases. 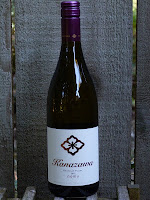 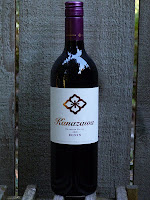 Ronin 2010 ($29.90 for 110 cases). This is a blend of 88% Merlot, filled out with equal amounts of Cabernet Sauvignon and Petit Verdot. Dark in colour, the wine begins with an appealing aroma of cassis and vanilla. On the palate, there are bright fruit flavours – black currant and black cherry – with chocolate and blackberry on the finish. 90. 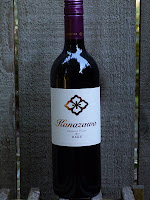 Raku 2010 ($29.90 for 100 cases). This is a blend of 85% Syrah and 15% Viognier. The grapes were fermented together, a fairly common practice. And while Viognier is a white variety, winemakers have discovered that it stabilizes and perhaps darkens the colour of Syrah as well as lifting the aroma. This is certainly a dark red with aromas that jump from the glass – aromas of vanilla, pepper, red fruit and chocolate. The palate is generous, with flavours of plum, black cherry, fig, pepper and dark chocolate. 91.

Diamond Flower 2011 ($20 for 200 ml). This is a late harvest Pinot Blanc with fresh flavours and aromas of new apples. The lively acidity balances the sweetness well in this appealing dessert wine. 89
Posted by JohnSchreiner at Goodgrog at 1:20 PM

Nice information thanks for sharing.

Those who doubt winemakers can make wine competently for themselves as well as someone else have absolutely no understanding of winemakers. It's like saying that parents intentionally set out to parent one child better than another. Ridiculous. Kudos to Richard for landing on his feet in difficult circumstances.