CedarCreek marks 25 years with its 2011 wines 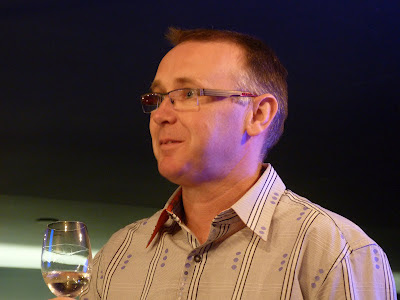 Darryl Brooker, the Australian born winemaker who joined CedarCreek Estate Winery in the spring of 2010, has now begun to release the wines from his second Okanagan vintage.

Both were challenging vintages but the evidence is in the glass that Darryl, who was new to the Okanagan, was on top of both – especially 2011. Even though that spring was late and cool, the rest of the year had conditions that produced superb aromatic whites and Pinot Noir, the flagship wines at CedarCreek.

CedarCreek president Gordon Fitzpatrick quietly beams with pride releasing wines like that in 2012. The winery is celebrating its 25th anniversary this year and wouldn’t mind making a splash.

You could argue that the winery is even older. Under its founding owners, it opened in 1980 at Uniacke Wines. The winery struggled – they all did in the early years – until Ross Fitzpatrick bought it late in 1986, relaunching it the following year as CedarCreek.

Ross, a successful mining executive and later a senator, had grown up in the Okanagan and was returning to his roots. His son, Gordon, joined the winery in 1996. That was a baptism of fire: 1996 was such a cold and late vintage that Gordon recalls picking Riesling grapes during a November snow storm.

Over the years, CedarCreek has employed legendary winemakers. Kelowna-born Ann Sperling made several good vintages before moving to in 1995. (She is back working with Okanagan wineries again, including family-owned Sperling Vineyards.)

In 1998 the winery recruited Kevin Willenborg from the Louis M. Martini Winery. He is believed to have been the first graduate of the of ’s renowned winemaking school at to work in the Okanagan. When he went back to in 2000, he was succeeded by Tom DiBello, another UC Davis graduate.

Tom stamped a style on CedarCreek in the 10 vintages he spent there. The winery was ’s winery of the year twice during that decade.

No wine had more of Tom’s fingerprints than its Ehrenfelser. An aromatic fruit bowl of a wine, it has a cult following.

Darryl, of course, had never made Ehrenfelser before coming to CedarCreek. Born in in 1973, he made wine in , and before coming to the Okanagan. Around the world, there is only a modest acreage of Ehrenfelser, a vinifera cross developed in and named for castle ruin near Rüdesheim.

Soon after arriving at CedarCreek, Darryl started hearing consumers telling him: “Don’t ruin the Ehrenfelser.” When he made a drier style in 2010 than the previous examples, “that’s when the death threats started to roll in.”

He is joking but he also listened to the consumers. The 2011 version has a little more residual sugar and less acid than 2010, resulting in more punch to the fruity aromas and flavours. It is still versatile with food while delivering the expected basket of fruit.

CedarCreek’s followers are now awaiting the release of the winery’s 2010 Pinot Noir because Darryl made changes in the choice of barrels and in the general style. Those wines should be released by this autumn.

And keep on eye on future Pinot Noir and Chardonnays. The winery will be building a new crush facility dedicated to these varietals.

Meanwhile, here are notes on the 2o11 releases to date.

CedarCreek 2011 Riesling ($17.90 for a production of 1,355 cases). Darryl had grapes available from two mature blocks: from vines planted in a Westbank vineyard in 1979 and from vines planted on CedarCreek’s vineyard near in 1991. He decided to pick the grapes on flavour, not on the numbers. So this wine ended up with 10.8% alcohol, 12.2 grams of acid per litre and 18.45 grams of residual sugar. He also fermented the wine very slowly, at cool temperatures, for about 60 days. The result is a tour de force with tangy lime and grapefruit flavours, with weight on the palate and with superb balance. As good as it is now, it will age very nicely for another two or three years. 91.

CedarCreek 2011 Ehrenfelser ($18.90 for 1,140 cases). There will certainly be no death threats for this juicy, tropical white with citrus aromas and flavours of pineapple, apricot and pink grapefruit. 89.

CedarCreek 2011 Gewürztraminer ($17.90 for 2,053 cases). The surprise in the winery notes is that 10% of this wine was fermented in French oak (not new). It was a good trick, adding to the viscous texture. The wine begins with aromas of spice and rose petals, continuing to flavours of lychee and spicy grapefruit peel. 90.

CedarCreek 2011 Rosé ($17.90 for 630 cases). The wine was made by bleeding some juice from every lot of Pinot Noir that was crushed last fall and fermenting the juice like a white wine. The skin contact has given this wine a lovely dark hue. There are aromas and flavours of cherry, raspberry and strawberry, with a touch of residual sugar to plump up the fruity flavours. 90.

Posted by JohnSchreiner at Goodgrog at 1:59 PM

John, you are such a wealth of information. It is a pleasure to read your blog posts, not only for your honest wine reviews but also to learn more about our past and the heritage of winemaking in Canada!

Thank you for your review of our new released 2011 White Aromatics.