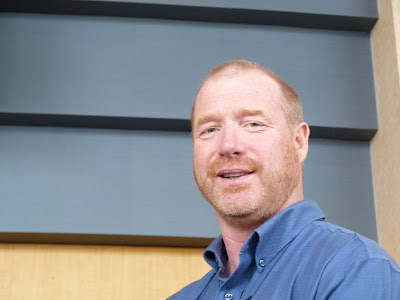 Mark Wendenburg, a consulting winemaker and a veteran of 30 vintages, has taken over as the new winemaker for Blasted Church Vineyards.

He dates his introduction to the wine industry from 1980, when he and his father, Chris, planted the five-acre family vineyard near Penticton.

He is best known for his 18 years as winemaker at Sumac Ridge Estate Winery. He left that winery in the spring of 2010 and hung out his shingle as a consultant. Blasted Church is now his major client.

The winemaking job at Blasted Church came open in March when that Okanagan Falls winery parted company with Richard Kanazawa.

Richard, who is now the winemaker at Lang Vineyards on the Naramata Bench, had been at Blasted Church for four years (the longest any winemaker has been at a winery with a bit of a turnover history).

Mark took over the Blasted Church cellar in June. He has inherited a portfolio of wines that, with very few exceptions, are impressive. (See my blog of March 28, 2011, for reviews of most of the wines.) At a tasting in Vancouver this week, it was obvious that Mark is also impressed with what has been handed to him.

Two months into the job, he is considering one change: the winery’s Pinot Noir table wine could be dropped from the portfolio because the grapes will be needed for an expanded sparkling wine program. Mark, after all, has a long and distinguished track record for making award-winning sparkling wine.

He was born in Penticton in 1961, shortly after his parents arrived in Canada. They had owned agricultural land in Germany’s Harz Mountains until the East German government relieved them of their property.

After helping plant the family vineyard, Mark went to Germany in 1982, apprenticing with wineries in three regions, and earning a winemaking diploma at the Bavarian State Institute for Viticulture and Enology in Franconia.

On returning in 1987, he started working at the T.G. Bright & Co. winery near Oliver. In winter of 1988, Mark did a crush at the Nobilo winery in New Zealand; the following winter, he did the crush at S. Smith & Sons in Australia (better known as Yalumba).

After that project wound up in 1991, Mark joined Sumac Ridge which was just getting its Steller’s Jay Brut sparkling wine launched. Sumac Ridge had begun handcrafting the wine in 1987 but production was insignificant until Mark came on board and until the winery installed adequate equipment for producing bubbly.

Steller’s Jay is now one of Canada’s best traditional method sparkling wines, an elegant blend of Chardonnay, Pinot Noir and Pinot Blanc. The awards won by this wine are legendary. Among others, Steller’s Jay Brut 2001 was sparkling wine of the Canada in the 2004 Canadian Wine Awards and also got a Lieutenant-Governor’s Award of Excellence in Winemaking. The current release, from the 2006 vintage, won a Lieutenant-Governor’s Award this year.

Sumac Ridge has piled up an astonishing array of firsts and awards during the past 18 years with Mark in the cellar, including Canada’s first red Meritage in 1993 and its first White Meritage in 1995. Pinnacle, first made in 1997, was the Okanagan’s first luxury red blend, selling then (and now) for $50. Sumac Ridge began making Gewürztraminer well before Mark joined the winery but his refinements to the wine help explain why it is Canada’s largest-selling Gewürztraminer.

At about 20,000 cases a year, Blasted Church is roughly a quarter the size of Sumac Ridge but with a similar portfolio of blends and varietals.

The Vancouver tastings also included three wines from Blasted Church’s Revered Series (as it calls its premium tiers). These are small volume wines made only in top vintages. All are still available from the winery. Here are my notes.

Holy Moly 2008 ($34.99 for a production of 57 cases). This is Petit Verdot. It is a dark red with the spectacular perfumed aroma of the varietal (there is even a hint of iodine). There are flavours of blackberries and boysenberries; and the wine has a dense, satisfying texture and a long finish. 92.

Cross to Bear 2008 ($34.99 for a production of 96 cases). This is a blend of Syrah and Malbec and, as Mark observed, the varieties “sit well together.” The wine has the peppery aroma and flavour of Syrah with the brooding black cherry and plum flavours of the Malbec. This is a big and demonstrative red. 93.

Nothing Sacred 2008 ($39.99 for a production of 195 cases). This is a blend of 50% Merlot, 40% Cabernet Sauvignon, and 5% each of Malbec and Petit Verdot. It is a bold, concentrated red with aromas and flavours of currants, cedar, even a touch of chocolate. The soft ripe tannins encircle a core of sweet fruit. 91.
Posted by JohnSchreiner at Goodgrog at 11:18 AM