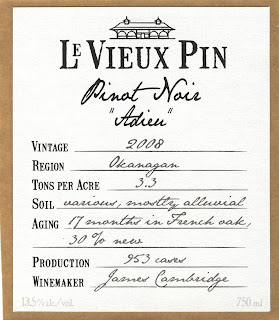 While the strategies of sister wineries Le Vieux Pin and LaStella continue to be moving targets, the focus is becoming clearer.

With its current releases, Le Vieux Pin (LVP) offers its last Pinot Noir. In spite of having made a good impression with earlier vintages, the winery management has decided to concentrate on the varieties that perform best in the south Okanagan. The Oliver-based LVP is switching largely to Rhone varieties while Osoyoos-based LaStella is emphasizing Italian and Bordeaux varietals.

This is not exactly hard and fast. The winery also produces wines to suit the opportunity. When the Cactus Club restaurant chain came calling, LVP blended 500 cases of a delicious white called Feenie’s Blend Blanc 2009. It is available almost exclusively through the restaurant chain, with 25 cases held for sale at $19.90 through the LVP web site.

This wine would normally fit into the winery’s introductory range, which include Petit Blanc and Petit Rouge at just over $20 each.

Next up the ladder are the varietals. At the top of the range are the reserve wines, exclusive wines under the Équinox label. Limited in volume, these wines are offered first to members of the LVP wine club and to those on the waiting list. They are priced appropriately.

Whether one buys the introductory wines or the varietals or the pricey exclusive wines, the wines all express their low-yielding vineyards superbly. Some earlier vintages were so exuberantly ripe and fruity that only the intense concentration of the wines masked the daringly high alcohol levels.

“The trend I am enforcing is restraint,” says Rasoul Salehi, the executive director of the wineries. His instruction to the winemakers: “Just tone it down a little.”

In other words, don’t sacrifice elegance just to get power. Intellectually, one agrees with that even if it is great fun to drink the equivalent of a five-litre turbo-charged V8.

Here are notes on some current and coming releases.

Le Vieux Pin Équinoxe Chardonnay ($60). Only 72 cases have been released. This barrel-fermented wine still manages to be a fresh as Chablis. It begins with aromas of citrus, honey and hazelnut and shows citrus and stone fruit flavours. The aromas and flavours blossom in the glass. This is a very elegant wine. 90. 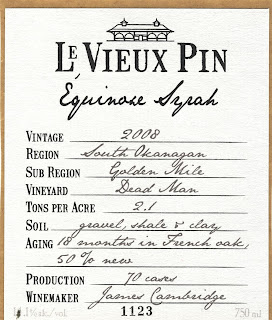 Le Vieux Pin Équinoxe Syrah 2008 ($70). There are 70 cases of this dark, meaty red, a wine with aromas and flavours of plums, black cherries and white peppers. The finish is very long and satisfying. 92.


Le Vieux Pin Équinoxe Cabernet Franc 2007 (Sold out). Only 26 cases were released. The wine is a tour de force with aromas of blackberries and menthol and flavours of lingonberries and red licorice. 95 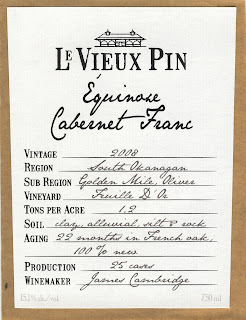 Le Vieux Pin Syrah 2008 ($45). This is a 487-cases release from young vines on Black Sage Road. It is a lovely wine, with sweet fruit on the palate – plum, black cherry and a touch of black pepper. It is appealingly full-bodied. 90.

Le Vieux Pin Viognier-Roussanne 2009 ($35). The winery has released 360 cases of this exotic and complex white. It begins with aromas of spice, honey suckle and tropical fruit; it tastes of banana, almonds, citrus, marzipan. It has good weight on the palate and a dry finish. 92. 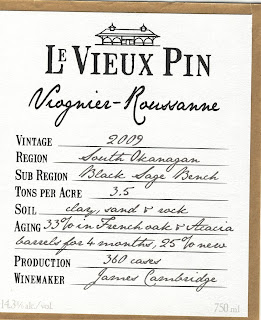 Le Vieux Pin Merlot 2008 ($35). This will be the last Merlot under the LVP label. The winery is releasing about 350 cases this fall. It is a dense, brooding red with flavours of black cherry and plum. The tannins are still a little aggressive but the further bottle aging will round them out. With age, layers of fruit will emerge. 90.

Le Vieux Pin Petit Rouge 2008 ($23). This is an 800-case blend with Merlot, Cabernet Sauvignon and a touch of Pinot Noir. The wine is juicy and appealing, with sweet berry aromas and flavours of black currants and plums. 90. 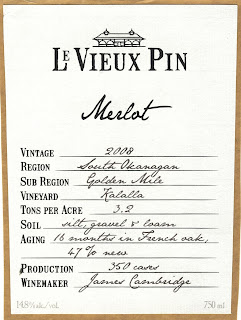 Le Vieux Pin Pinot Noir “Adieu” 2008 ($35): This wine is so named because it is the winery’s final vintage of Pinot Noir; the long term plan when LVP opened in 2006 was to transition to the Rhone varieties that had been planted in the winery’s new vineyard. This wine – 953 cases have been released – is a memorable goodbye. The wine includes fruit from three Okanagan vineyards – one in the north, one in the central part of the valley and one in the south. That provided winemaker James Cambridge with a balanced palate of flavours, minerality and acidity. The wine begins with aromas of strawberry and raspberry; the flavours lean more to raspberry, with a finish of bright, lively fruit. In the glass, the wine opens gradually to show the classic weight and silky texture of the variety. The structure suggests that the wine will develop even more complexity for those with the patience to cellar it a few years more. 89. 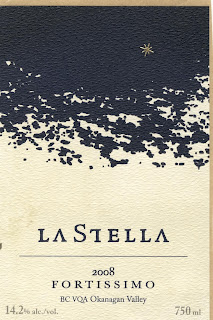 LaStella Fortissimo 2008 ($35). This is a blend of Merlot and Cabernet Franc with about 8% Sangiovese and aged not in conventional barrels but in large French puncheons. The object is to make a mellow, full-bodied wine with soft tannins. This is a juicy red, with sweet berries in the aroma and with flavours of cherries enhanced with savoury spice. 91.
Posted by JohnSchreiner at Goodgrog at 2:13 PM