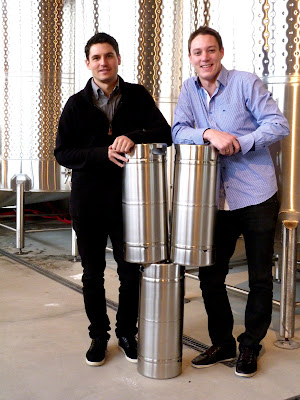 Until now, ’s strong wine culture has had everything but an actual winery.

Steve Thorp and Mike Macquisten have closed the loop by opening Vancouver Urban Winery in Railtown, the trendy new commercial district just east of , bordering the .

Here, heritage industrial buildings are getting a new life as headquarters for social media companies, coffee distributors and fashion retailers like Aritzia. Vancouver Urban Winery is in a splendid high-ceilinged structure that was built in the 1920s for metal fabrication. It has been turned into a winery with the addition of stainless steel tanks, racks of barrels and, crucially, a long bar with 20 taps for dispensing wine.

That is what Vancouver Urban Winery is adding to the city’s wine culture: through a subsidiary called FreshTAP, it has begun providing wine by the keg to restaurants  that have installed wine taps. This promises to revolutionize the way restaurants offer wines by the glass.

This is already a hot trend in the . An article last summer in Seattle Magazine listing restaurants with wines on tap commented that “the concept isn’t new [but] modern technology makes serving wines on tap a game changer.”

The reason: the system for wine by the keg means wines sold by the glass should always be fresh, which is not always the case when half empty bottles sit around overnight. Secondly, the shipping economy inherent with keg wines makes it possible for restaurateurs to pass along some savings to consumers.

Steve and Mike are friends who partnered several years ago to set up their own marketing company and then went looking for business ideas. Steve previously operated a sports equipment sales company. Mike previously worked with the group before moving into beverage alcohol sales with Molsons and then with Corby Distillers wine agency.

There are two other investors in Vancouver Urban Winery: restaurateur Wayne Holm, a member of the B.C. Restaurant Hall of Fame, and Rueben Major, a chef who is director of culinary development for Earls.

“It was actually Reuben Major who brought the original concept to us,” Steve says. “He was in and stumbled on it there.” Subsequently, he found wine on tap was developing in other cities there as well.

“We spent about four months in deep research mode,” Steve says. “We travelled the and met with the four largest keg packaging companies there.  After four months we put together the entire concept for what is now FreshTAP, the keg side of our business.”

The key to making it happen in the regulatory environment was to establish Vancouver Urban Winery as a commercially-licensed winery. They had less trouble selling the idea to ’s regulators than they had selling it to the city of .

Here, there had never been a winery and therefore, no zoning for one. The city turned down the first two buildings in which Steve and Mike wanted to install the winery. Then they found the former metal working building at . There were no zoning impediments and the space works as a winery, with a tasting room. The partners plan to open Vancouver Urban Winery to the public by the end of May. They also plan to make some wine there this fall and to launch a proprietary wine brand.

However, this is primarily a vehicle for FreshTAP. Wineries that want to offer wine on tap deliver it in bulk to Vancouver Urban Winery. Here, the wine is stored under nitrogen until it is transferred into 19.5 litre stainless steel kegs. These kegs are pressurized with nitrogen until filled with wine. At the restaurants, the kegs fit into a system where more nitrogen protects the wines from air as it is drawn off by the glass. It is similar to the way beer on tap stays fresh.

The Edible Canada Bistro on was the first restaurant to install the FreshTAP system, offering Nichol Vineyards’s Pinot Gris and Nine Mile Red on tap. The restaurant trumpets the advantages on the system on its website. One of them: “Reducing the bottling costs allows the winery to pass on savings directly to restaurants and through to the consumer.”

Other wineries that have come on board so far include , Desert Hills, Okanagan Crush Pad and King Estate from . Mike and Steve are negotiating with others interested in getting wines on tap in restaurants. (Not all wineries are buying in: one Okanagan winery owner told me that they will not allow their wines to be repackaged by third parties.)

Other restaurants are also coming on board. For example, The Mill Marine Bistro in is installing eight wine taps. “We want to work with trend setting restaurants,” Mike says. “It is a matter from day one of making sure that we are working with the right partners that are behind wine on tap, and know the benefits of it.”

Because Vancouver Urban Winery has a large public area, it also makes the facility available for wineries showing their products to the trade. Last week, Okanagan Crush Pad debuted some of its recent vintages including a new three-litre bag in the box package for three of its Haywire brand wines.

That package is another means for shaving the cost of wine to the consumer. A box of wine, equal to four bottles, sells for $54 (the rosé is $2 less), which works out to $13.50 a bottle. The briefcase-sized boxes slip easily into the refrigerator or on the counter. You can draw off a glass of wine whenever you feel like and the wine stays fresh for a reasonable period.

Posted by JohnSchreiner at Goodgrog at 4:44 PM