When the new Phantom Creek Estates winery opens in 2018, both its premium red wines and the architecturally-stunning winery will cause a sensation in the Okanagan.

The winery is rising from the former Sundial Vineyard and the nearby Phantom Creek Vineyard, both purchased earlier this year by China-born Richmond businessman Richter Bai (Mr. Bai to his winery colleagues).

“My goal is to produce outstanding wine in Canada,” Bai told me through a translator.  In its first vintage in 2016, Phantom Creek crushed 100 tons of Bordeaux red varietals.

He is not another investor parking money in British Columbia real estate. When I visited the winery during crush last October, I noticed that he was pitching in with various winery chores, very much the hands-on owner.

Bai has assembled a strong team to run the winery. That includes Phantom Creek’s recently appointed president, Ingo Grady, a 35-year wine industry veteran who has been director of wine education for 17 years at Mission Hill Family Estates. Before that, he ran his own wine import agency for 10 years.

“I had a big corporation in China,” Bai says. “I understand if you want to do something that is the best, you must have the best team. If you don’t have the best persons, then you cannot achieve that goal.”

Bai once owned an iron mine in China’s Shanxi Province and now operates a flaxseed processing firm in China, managed by his son, Brandon, 30. He immigrated to Canada when his children decided to study at Canadian universities.

Bai says his interest in wine may have been triggered by the traditional rice wines made in his village in China. “When he came to Vancouver, he discovered some of the wineries here,” says wine consultant James Cluer MW, who became his coach here. “In China, he had been fortunate to enjoy a lot of wines. He was a wine lover. He thought maybe he could realize a dream of actually building a winery in British Columbia.”

Before he committed to a vineyard in the Okanagan, Bai educated himself in the wine industry by visiting about 100 top-flight wineries in California and Europe. “At the vast majority, he met the owners and the winemakers, and got the more in-depth tour and visit,” Cluer says. “And we say a lot of amazing things because we went to the great producers in those regions.”

A business plan came together in July, 2015, with Napa Valley winemaking consultants Anne and Cameron Vawter joining the Phantom Creek team. In April, 2016, Bai purchased the 60-acre Sundial Vineyard, a prime site for Bordeaux varietals that had been planted in 1992 by Harry McWatters.  Bai plans to refresh the vineyard with plantings of newer clones. Organic practices are being adopted gradually.

Bai also bought the nearby Phantom Creek Vineyard, a seven property where veteran vineyardist Richard Cleave grew Bordeaux reds for some of the best wines made by Sandhill Vineyards. Bai also tried to buy the nearby Saddle Ridge Vineyard, a 47-acre Black Sage Road vineyard, only to be thwarted by Mission Hill Family Estates, which exercised its right of first refusal. Subsequently, he bought 20 acres, also for reds, nearby on the Black Sage Bench.

The Vawters were already familiar with these vineyards. In the vintages of 2012, 2013 and 2014, Anne sourced Black Sage Bench grapes to make ultra-premium Bordeaux blends for One Faith Vineyards. The One Faith wines, currently priced at more than $165 a bottle, are the most expensive in the Okanagan. The Vawters ended their consulting to One Faith when they joined the Phantom Creek project in 2015.
Anne (right) grew up in Washington State wine country. After considering a career in dentistry, she got a degree in viticulture and enology at the University of California, quickly emerging an important consultant winemaker. Most of her clients (such as Ziata Wines, Oakville Ranch Vineyards and Teaderman Vineyards) are in . Her husband, Cameron, is the winemaker at Dana Estates at Rutherford. Anne has her own label, Red Mare Wines, a name inspired by her equestrian interests. She manages Blossom Creek Ranch, a horse farm in Calistoga. 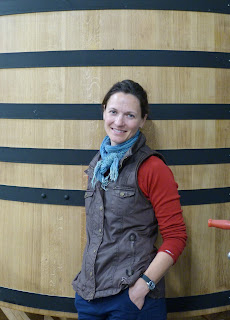 “My interest in wine came through my uncle who ran a beer and wine distributorship in the Seattle Tacoma area,” Anne says. “He introduced my father to good wines. We lived in Walla Walla. My father would find wines and go on wine lists. I was one of his children that enjoyed tasting the wines with him, even when I was little.” She acted on his suggestion that she go to the University of California to study winemaking.

To crush the 2016 vintage, the Bai group built a temporary winery last summer in the vineyard (taking out some Cabernet Franc). A large metal-clad building, it likely will serve future storage needs. Currently, it houses five new oak fermenters, along with stainless steel tanks, numerous barrels and leading edge winery equipment including an optical sorting table.

At Phantom Creek (as she did at One Faith), Anne fermented the Bordeaux red varietals both in oak vats and in French oak barrels, achieving wines that are bold but accessible. “Tannins are something I focus on a lot as winemaker,” she says. “As a wine lover, I think delicacy and elegance of tannins is really important in creating the yum factor. It has to be supple and soft and delicious.”

Phantom Creek is producing a “flagship” Bordeaux blend, some ultra-premium small lot reds and a range of varietals that Anne says will be “entry level but not cheap.”  She has 52 separate lots of red wine in the cellar, giving her excellent options for blends. 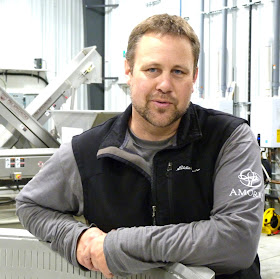 New Zealand-born Ross Wise (left) joined Phantom Creek in September, 2016, as the fulltime winemaker. He joined Phantom Creek because it offers “the chance to make nothing but premium wines.”
A 2005 enology graduate of Australia’s Charles Sturt University, Ross came to Canada in 2006, working as a harvest intern at Flat Rock Cellars in Ontario. He stayed on, ultimately becoming the winemaker in 2010. In 2012, he launched his own consulting firm, making wines with several Ontario wineries, most recently Keint-he Winery and Vineyards, a self-described Burgundian winery in Prince Edward County.  Ross is also studying to become a Master of Wine.

Before selling the vineyard in 2016, McWatters had already built the ground floor (barrel cellars and processing space) for a 35,000-case winery at the top of the Sundial Vineyard. It was to be called Time Winery and is now being recreated in a former theatre in downtown Penticton.

The Bai group has retained that ground floor, but is extending it to build a 50,000-case winery. Backen, Gillam and Kroeger, a San Francisco and Napa firm of architects with a portfolio that includes 40 wineries, has designed Phantom Creek.

“We are building around and within the Time shell on the hill,” says John Taft, Backen, Gillam’s senior winery architect. “As you approach from Black Sage Road, you would come in from the south to the winery. You would come up through the vineyard. We are building on top of the hill, into the site to take advantage of the underground spaces which are best for barrels. We will build new on top. This is the hospitality facility. There is the restaurant where it has the panoramic view. You get amazing views from the hospitality room, looking straight south down the valley.”

The winery’s underground cellars are designed both for handling wines by gravity and for allowing customers to tour the entire facility. Taft’s model includes a cellar for large oak vats and another of Alsace-style oak foudres for future white wines.

No whites were made in 2016 at Phantom Creek, aside from Riesling Icewine. The Chardonnay grapes at Sundial were sold last fall. The block may be replanted with red varietals in a gradual renewal of the vineyard planned to begin in two years.

However, Phantom Creek is looking elsewhere in the Okanagan for Riesling and Pinot Gris for table wines. The winery is considering making those wines in a joint venture with a major Alsace producer, whose name has not yet been disclosed.
JohnSchreiner at Goodgrog at 3:35 PM