Howard Soon on the label 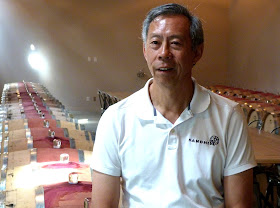 This Howard Soon’s 20th year as the winemaster for Sandhill Wines. And it is the second year in which Sandhill releases two ultra-premium wines with Howard’s name on the label.

This legendary Okanagan winemaker, widely respected by his peers, deserves this tribute.

He was born in Vancouver in 1952, the grandson of a shopkeeper who emigrated from southern China in the 1880s. He holds a 1974 biochemistry degree from the University of British Columbia and began his career working in a large brewery. After five years, he joined, he joined Calona Wines in 1980 as a quality control supervisor. He was promoted to assistant winemaker in 1981, subsequently became the chief winemaker.

Sandhill Wines was launched in 1997 as a boutique brand within Calona. Sandhill is differentiated both by its premium wines and by its philosophy: Sandhill’s wines have always been made from single vineyards which are identified on the label.

Originally, there was to be a separate winery on the Sandhill Estate Vineyard on Black Sage Road. Indeed, when that vineyard was planted, two potential winery sites were set aside. Those plans were ultimately shelved after Andrew Peller Ltd. bought Calona and Sandhill in 2005 and invested instead in additional vineyards.

Several years ago, however, Peller added a large and somewhat theatrical tasting room and wine shop to the venerable Calona winery in downtown Kelowna. That is where Howard now hosts tastings and that is where Howard Soon wines are sold.

These are the signature wines for a winemaker who had had a longer career at a single winery that anyone else in the Okanagan.

The greatest single vineyard from which Howard has received grapes has been the seven-acre Phantom Creek Vineyard on Black Sage Road. The last vintage in which those grapes were available to Howard was 2015. The vineyard (along with the Sundial Vineyard) was acquired last year and will anchor a winery called Phantom Creek Estates.

Sandhill now sources some premium reds from Vanessa Vineyards in the Similkameen. This 100-acre vineyard has relatively young vines but it holds the promise of high quality wines as well. Certainly, the flavour profile differs from Phantom Creek. That simply underlines the Sandhill philosophy of making single vineyard wines that display the terroir and individuality of each and every vineyard.

The Howard Soon wines stand at the peak of the Sandhill pyramid. There are wines in a value-priced tier, capped by a “small lots” tier and now by the Soon series.

Here are notes of some of the wines, tasted with Howard in the palatial Kelowna wine shop.

Sandhill Rosé 2016 ($15.75). This is primarily a blend of Sangiovese and Barbera. It presents with a delicate pink hue, leading to aromas and flavours of strawberry and cranberry. The dry finish makes this an excellent rosé with food. 90.

Sandhill Cabernet Franc 2014 ($17). This is a new release in a series called “Distinct Wines.” The wine shows the classic bramble aromas and flavours of the variety. The fruit is framed with subtle oak notes. 90.

Sandhill Small Lots Petit Verdot 2014 ($N.A. for six barrels). This wine is typical of the variety, with a dark colour and with a dense texture. It begins with a perfume of violets mingled with black pepper, leading to flavours of blueberry and black cherry. The finish is very long. 92.

Sandhill Small Lots Barbera 2013 ($26 for 10 barrels). This wine has bright and spicy fruit on the nose and the palate, with flavours of blackberry and cherry and a hint of pepper on the lingering finish. 90.

Sandhill Small Lots Sangiovese 2014 ($27.49 for 23 barrels). Sangiovese may be the great red of Tuscany but it is rarely grown in the Okanagan. It is said that Sangiovese “does not travel well.” You would not know it from tasting this wine. It has aromas and flavours of cherry, with licorice, leather and spice on the finish. The 20 months this aged in French and American oak has given the wine a polished, full-bodied texture. 91.

Sandhill Small Lots One 2014 Phantom Creek Vineyard ($32 for 22 barrels). Vintage after vintage, this wine has shown that Phantom Creek is one of the great vineyards in the Okanagan. This is a co-fermented blend of 67% Cabernet Sauvignon, 10% Malbec, 16% Petit Verdot, 4% Merlot and 3% Syrah. The wine was aged for 24 months in new American oak. The wine begins with aromas of black cherry and vanilla. Generous in texture, it delivers flavours of dark fruits and cassis. The tannins are supple and support a lingering finish of luscious red fruit. 93

Sandhill Small Lots One 2016 Vanessa Vineyard (barrel sample). This wine is a co-fermented blend of Cabernet Franc, Merlot and Cabernet Sauvignon. Early in its aging process, this is a promising successor to the previous succession of Phantom Creek wines. The profile seems brighter, with minty and floral aromas and with brambly flavours. 90-92.

Howard Soon Chardonnay 2015 Sandhill Estate Vineyard ($60 for 140 cases). The grapes for this wine are from an exceptional single block of 19-year-old vines. This elegant wine was aged nine months in barrel (85% French, 15% stainless steel). It begins with buttery aromas of citrus and apple. On the palate, subtle oak frames the vibrant citrus flavours. 92.

Howard Soon Red 2014 Phantom Creek Vineyard ($60 for two barrels). This is 71% Cabernet Sauvignon, 16% Petit Verdot, 8% Malbec and 5% Merlot. This wine displays the triumphal achievement of a veteran winemaker with grapes from a superior vineyard in the Okanagan’s best vintage (so far). It begins with seductive aromas of black currant, black cherry and vanilla. The palate is rich and intense, with ripe dark fruit, black cherry, black currant ands vanilla. The lingering finish has notes of dark chocolate and spice. 94.
JohnSchreiner at Goodgrog at 1:21 PM